What started off as an idea of capturing the quintessential summer afternoon in the garden with a picnic in gin form is now, 20 years later, one of the best know gin brands in the world. With it’s unique brand and bottle, a visual homage to victorian tinctures and remedies, tied with a history and heritage of distilling and a healthy dose of cucumber infused fun, Hendrick’s Gin has helped ignite the imagination of gin drinkers around the world. 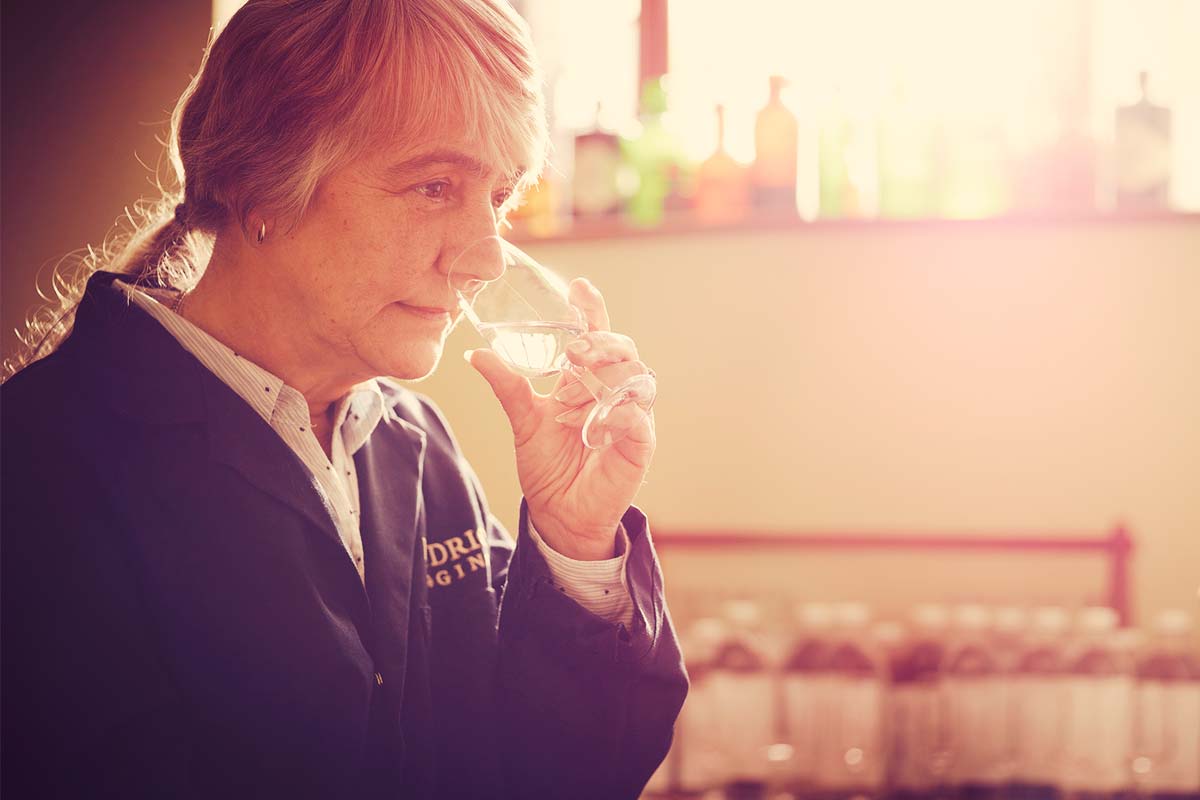 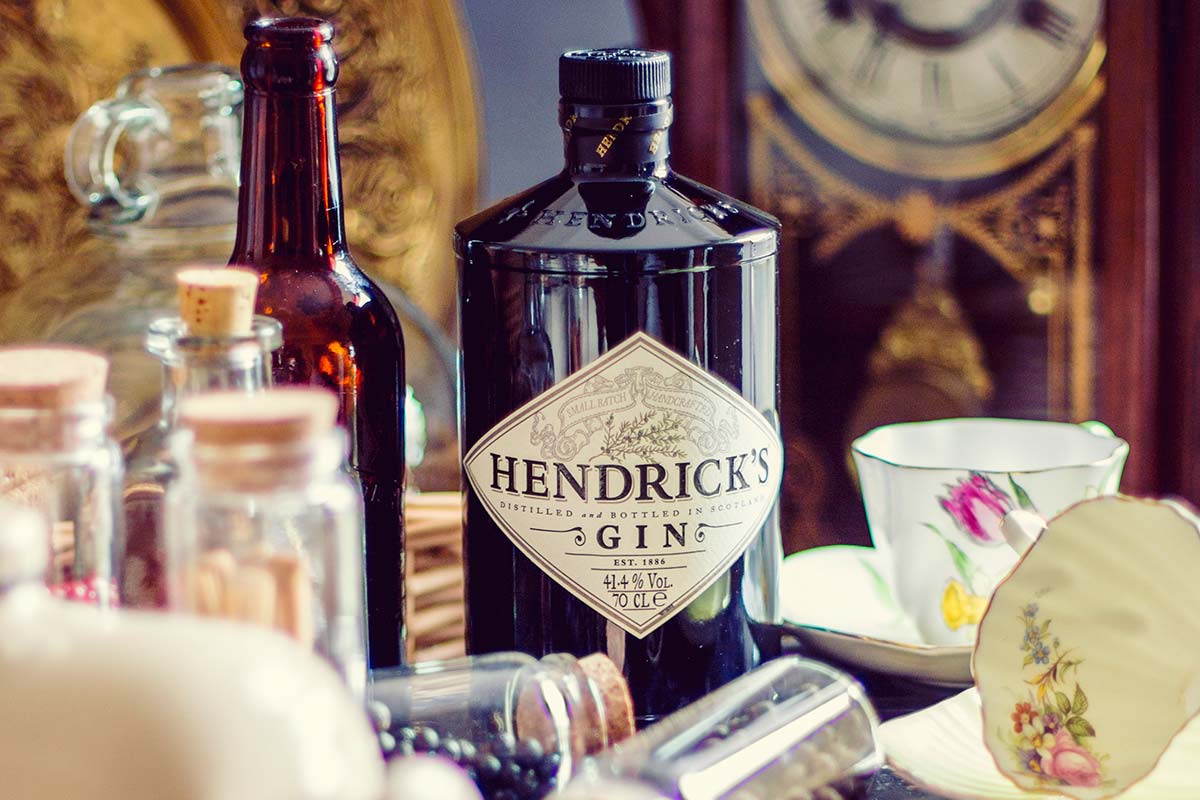 In 2013, Lesley took part in a two week expedition in the Guiana Highlands of the Venezuelan rainforest with Charles Brewer-­Carias, a renowned explorer and Francisco Delascio, a respected botanist. It was during this time that Lesley discovered native flowers, roots, fruits and seeds, which provided a new canvas of botanicals and flavours. It’s no coincidence that one of the two greenhouses at the Hendrick’s Gin Palace has the temperature set to mimic that of the Venezuela rainforest as the greenhouse is home to a number of exotic species of flowers and plants.

We recently caught up with Lesley to discover more about her own journey into the world of Scottish Gin and distillation, some of the challenges of using a gin still that dates from as far back as 1860, along with some advice for the female distillers of tomorrow. 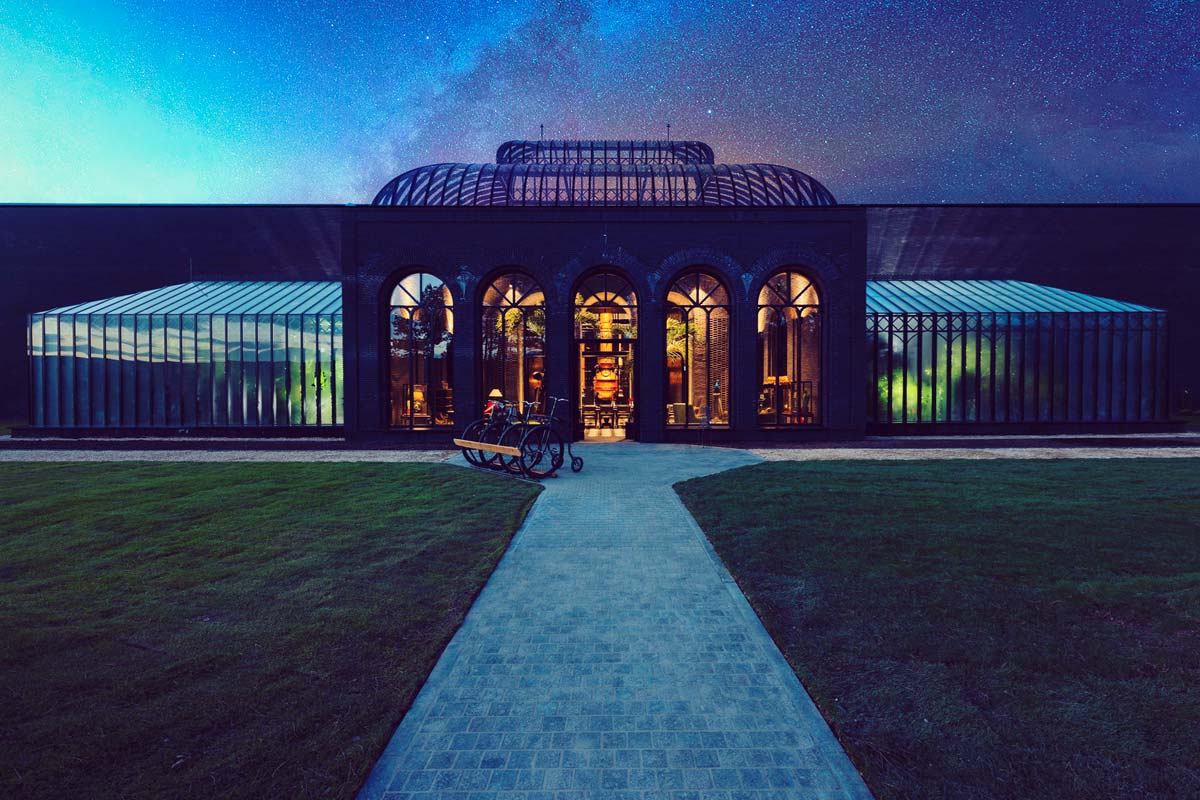 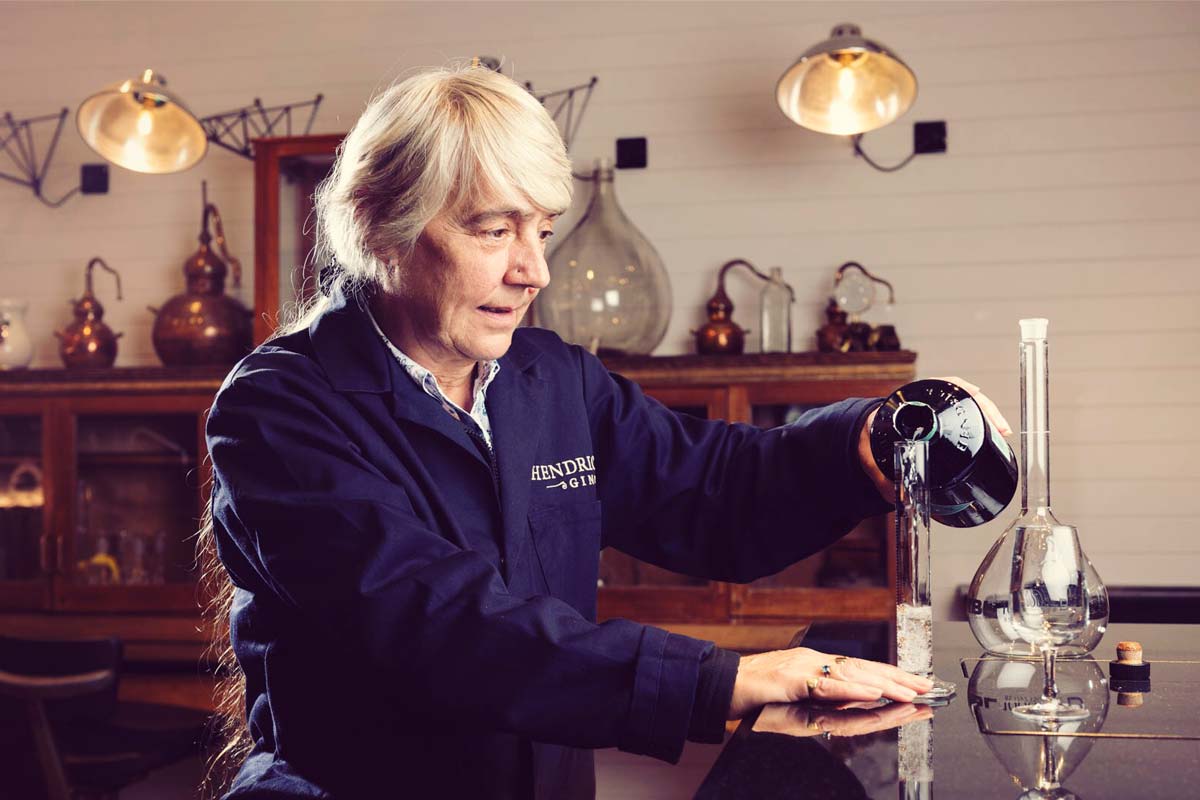 What do I do? I’m very proud to say I make Hendrick’s Gin and ensure every single drop is true to the original recipe I created over 20 years ago. We still make Hendrick’s in teeny tiny batches, just 500 lovely litres at a time. My key objective is total consistency, wherever you are in the world, whenever you taste Hendrick’s Gin, it will taste exactly the same as that very first batch I made.

Now, how I do it is the interesting thing. It all starts with the botanicals, we distil 11 botanicals to make Hendrick’s Gin in two very special, peculiar stills – a vintage Carterhead and an antique Bennett still and then add the finishing finesse of our signature essences of cucumber and rose.

The quality of our botanicals is key to our distinctly different flavour profile, and so we work very closely with the right people to help us find the very best botanical expressions from around the world. I’m very particular about what we need to create Hendrick’s Gin and spend a lot of time up in my lab at the Hendrick’s Gin Palace in Girvan Scotland, analysing samples to ensure we have the best quality expressions. 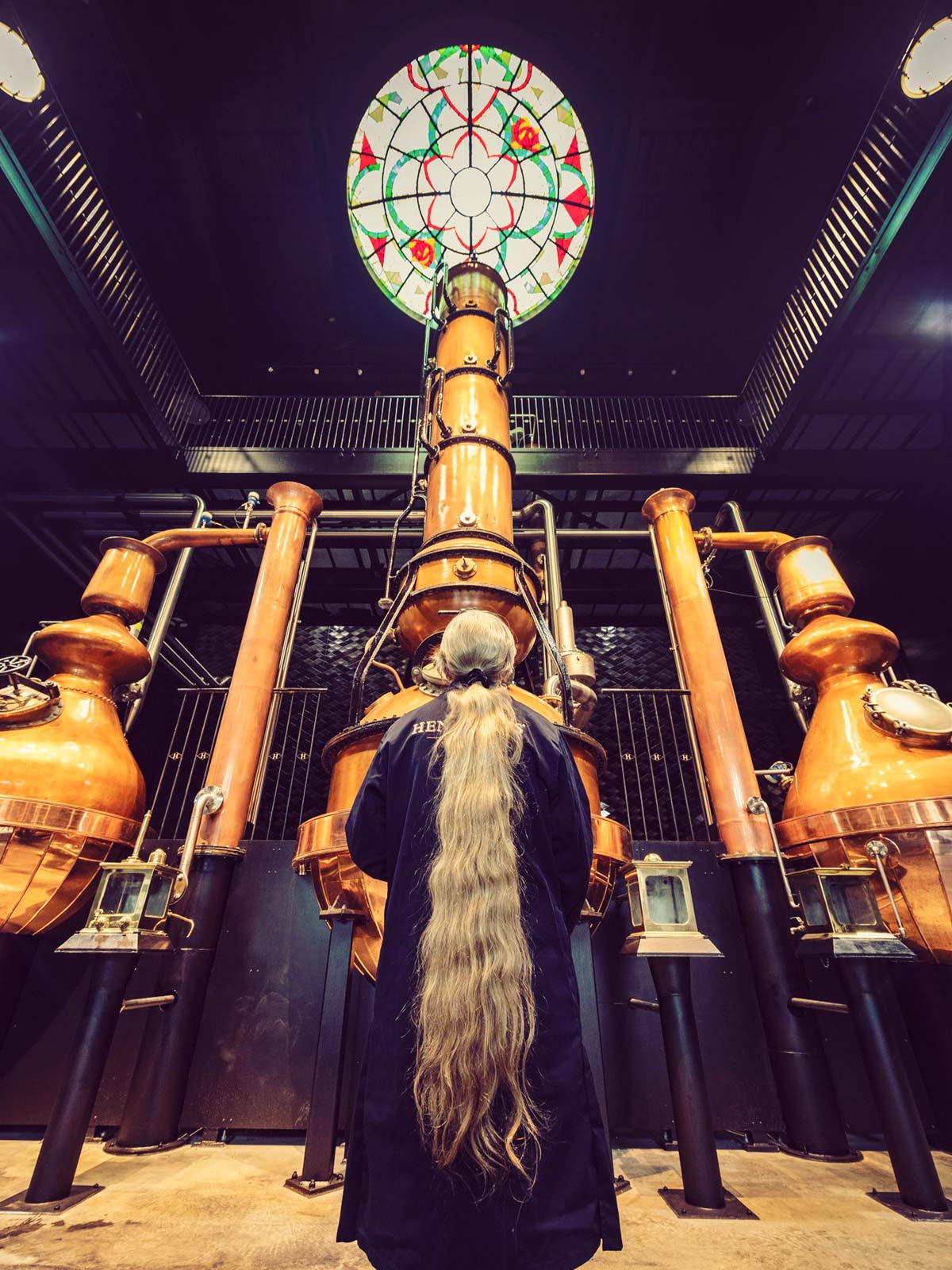 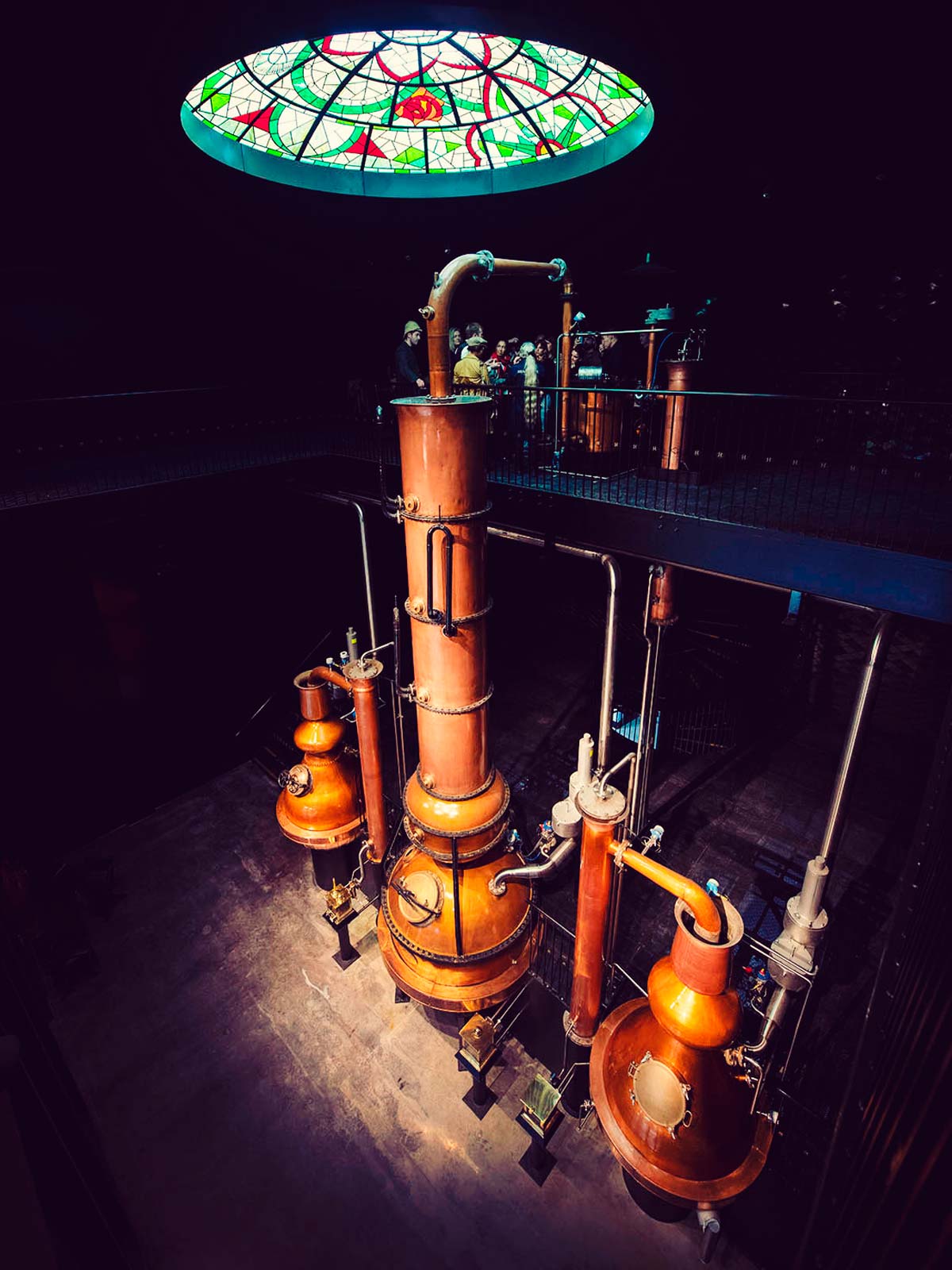 The Hendrick’s Gin Palace is my playground really, I was able to shape what it would look like when it was built in 2018. I insisted on two glorious hothouses where I could experiment with new weird and wonderful botanicals, stuff you can’t normally grow up here in Scotland, like bananas. Yes really, we have quite possibly Scotland’s first bananas growing in one of my hothouses. If you’re wondering what Scottish bananas taste like, well they are delicious.

I spend a lot of time in these hothouses tending to my various exotic specimens of flora as well as up in my lab where I distil various concoctions which may one day be released from the Cabinet of Curiosities, but until then they’ll remain under lock and key in that cabinet in my lab.

I trained as a chemist and I’ve always been interested in the science behind flavour. What makes compounds work together to create something more complex and interesting than the sum of its parts. I actually started off my career in the pharmaceutical world, it was my job to find the proverbial spoonful of sugar to help the medicine go down. I’ve been called a Mary Poppins of sorts, I’m not sure about that, but I do know how to make things taste good.

When working in the pharmaceutical industry, I found there were some incredibly effective drugs that tasted truly awful, if something tastes bad no matter how much good it can do, people just aren’t going to take it, so it was my job to use a little wizardry to make medicines more palatable.

But I have to say working in spirits is a delight. With spirits it is not about masking bad flavours but creating entirely new wonderful ones that are a delight to drink. 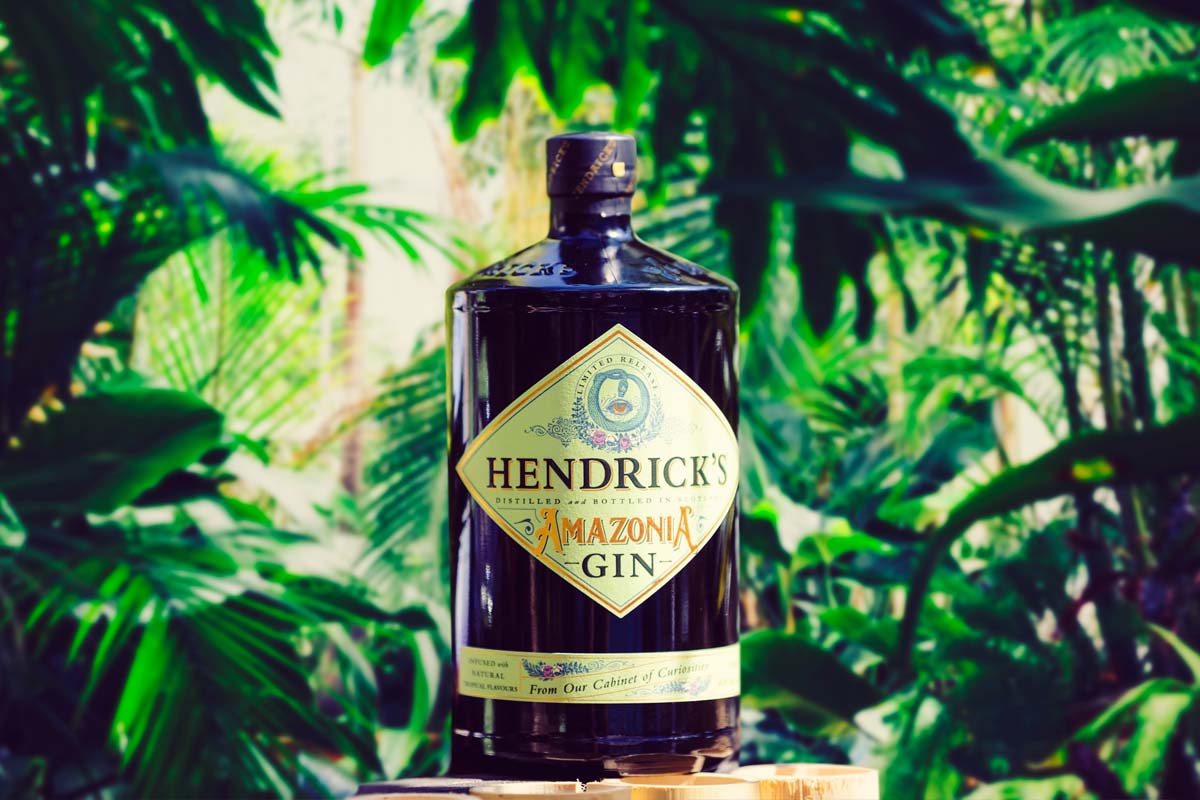 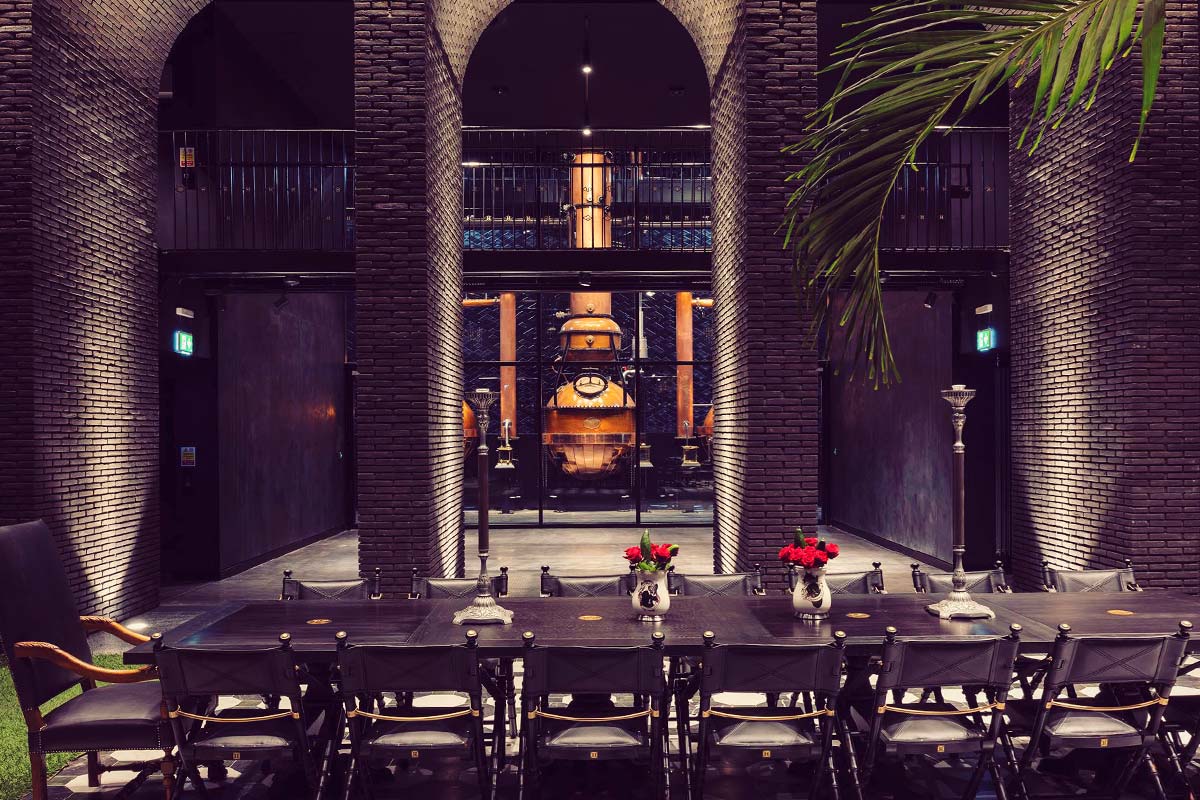 Well I’ve been working in gin for over 20 years. I was asked by Charlie Gordon, the great grandson of William Grant, our company founder, to create a new, unusual gin the likes of which the world had never seen. You have to remember this was back in 1999, when there were only a handful of bottles of dusty gin behind the bar, gin just wasn’t something people were drinking that much of and so it was pretty unexpected to want to make a gin. But Charlie had an idea to create a very different gin that would spark consumers’ imaginations.

This gin would include the quintessential British elements of rose and cucumber and I had two very special stills to play with, an antique Carterhead still and a vintage Bennett still. I just needed to figure out how to get the fresh, green aromas of cucumber and delicate rose scents into the gin and once I did, the rest as they say is history.

Charlie was right, he was a smart cookie and knew his business. People seem to really like our gin, sales are growing all around the world. And I’m able to continue experimenting with new and unusual flavour combinations sometimes just for fun and to satisfy my curiosity but through countless experimentation I can create some real gems.

How did you get into the spirits industry?

As I say, I trained in chemistry and was working in the pharmaceutical industry before joining William Grant & Sons. I started in the technical team as a chemist back in 1988, analysing samples and later moved into the flavour department, creating new expressions of whisky or different types of spirits and liqueurs, before I was given the challenge to create the world’s most unusual gin, what was to become Hendrick’s Gin.

Do you think more could be done to encourage women to seek a career in distillation and spirits?

Yes absolutely, there are lots of opportunities in the spirits industry for women and many more female Master Distillers than when I first started over 30 years ago. Back then whisky especially, was very male dominated, but yes this is a great industry that is very welcoming of talent and encouraging more people to consider it as an option would be great. My message to women wanting to build a career in distillation and spirits. If you want to do it. Do it. There’s nothing stopping you. 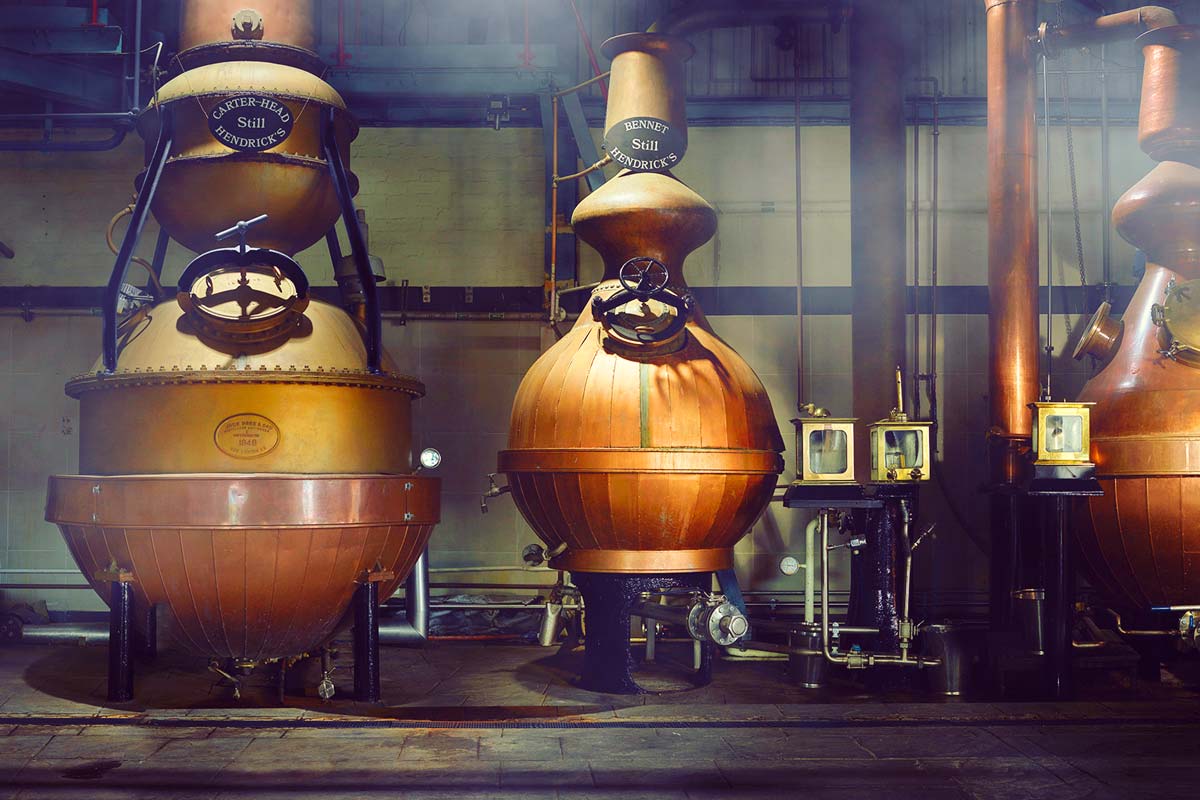 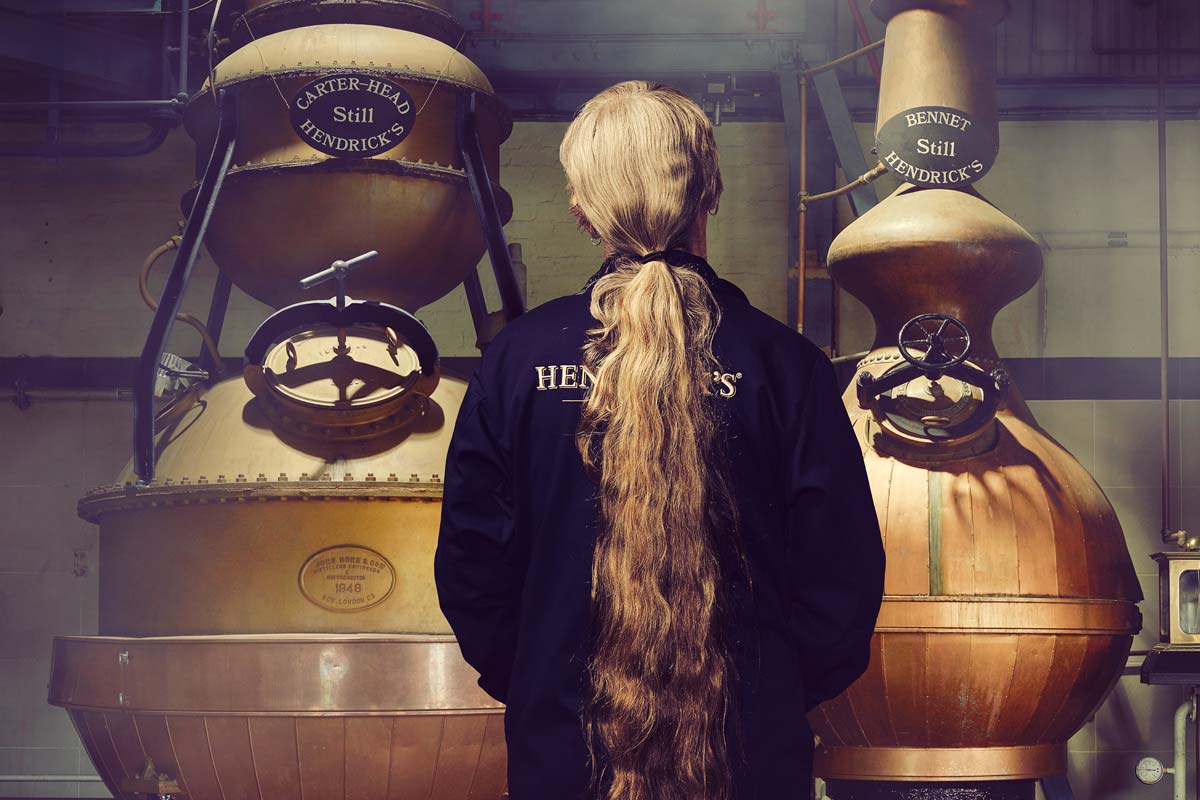 Right from the start of the development work Charlie Gordon wanted us to use the two very special stills that he had purchased at auction back in 1966. One of these is a beautiful 1000 litre pot still made back in 1860, she is very special and works as well today as the day that she was built. I always say that when I retire I am taking her with me. The other is a 1948 Carterhead still complete with the flavour basket where we add the dry botanicals. The two stills operate differently and give distillates which have totally different flavour profiles despite the use of the same eleven dry botanicals in both of them. The biggest challenge was therefore to determine the optimal operational parameters for both stills to allow us to marry the two distillates together to produce the classic Hendrick’s flavour. 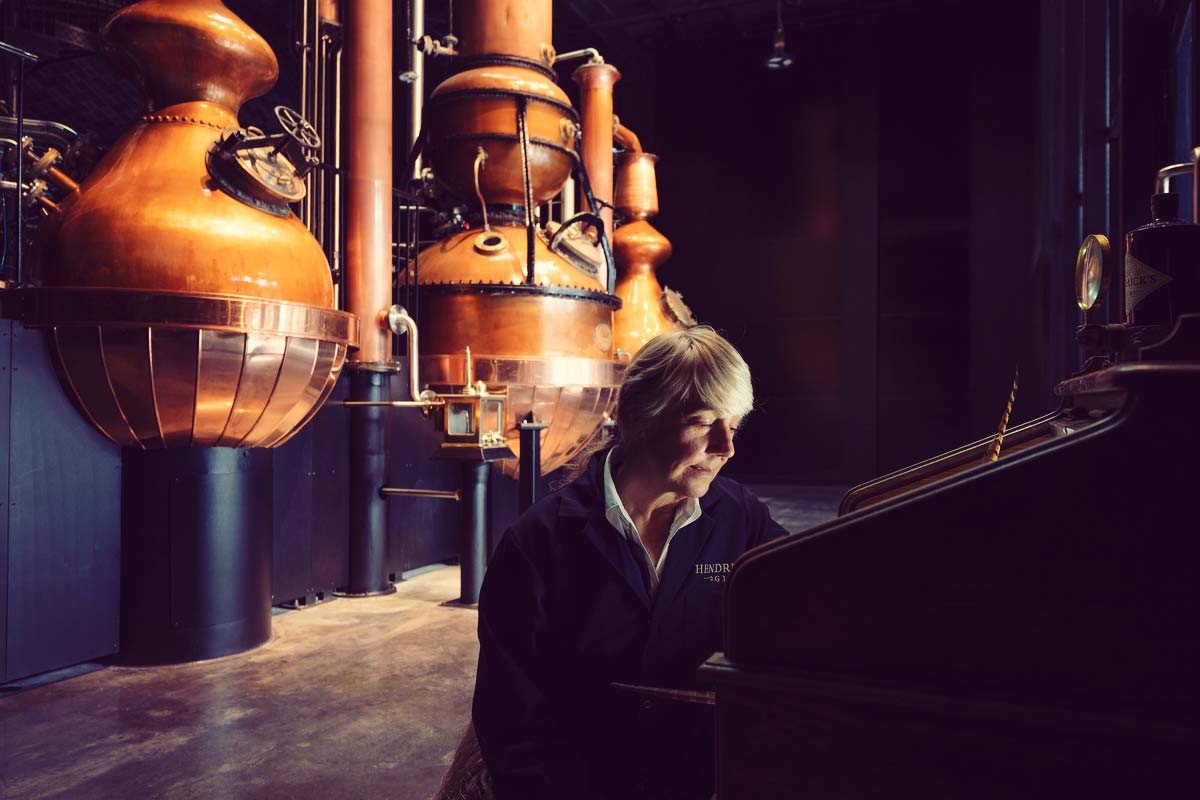 Be curious. Ask questions and always experiment. Sometimes you have an idea of what something might taste like or how certain botanicals might work together, what will enhance the final liquid, but the only way to know for sure is to try. The way things react together isn’t always how you’d expect, I was once given a smoked salmon and strawberry sandwich during a paired cocktail competition and it may sound awful but it was amazing. You just don’t know what works together until you try. So have a play with things and see how they work, some of the experiments I do in my lab at the Hendrick’s Gin Palace don’t work and end up down the sink but others are absolutely incredible gems that get locked away in my Cabinet of Curiosities ready for release when the time is right.

Scottish Gin to me quite simply means a gin distilled in Scotland. The Hendrick’s Gin Palace is located in Girvan, on the wonderfully rugged Ayrshire coast on the South West coast of Scotland.

What makes Scotland special, and I say this as a Yorkshire woman, is the care and attention of all of the workers here in Scotland to craft something special. 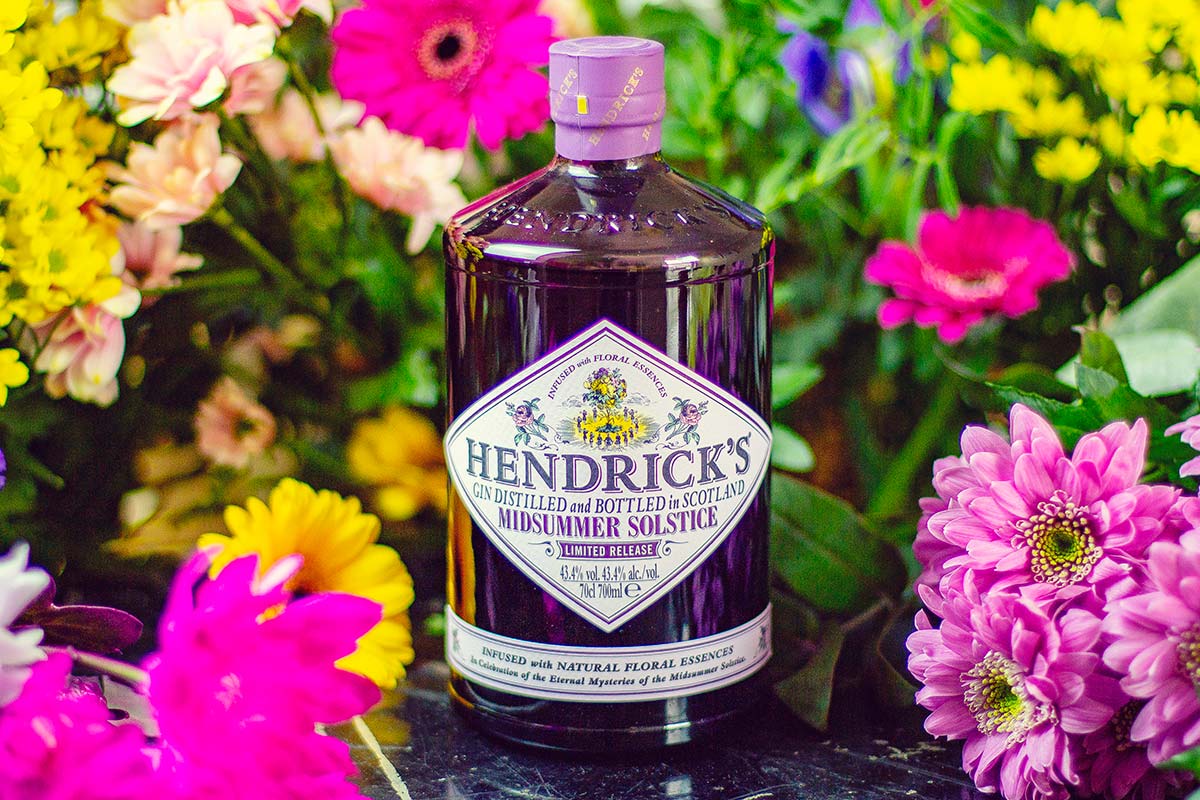 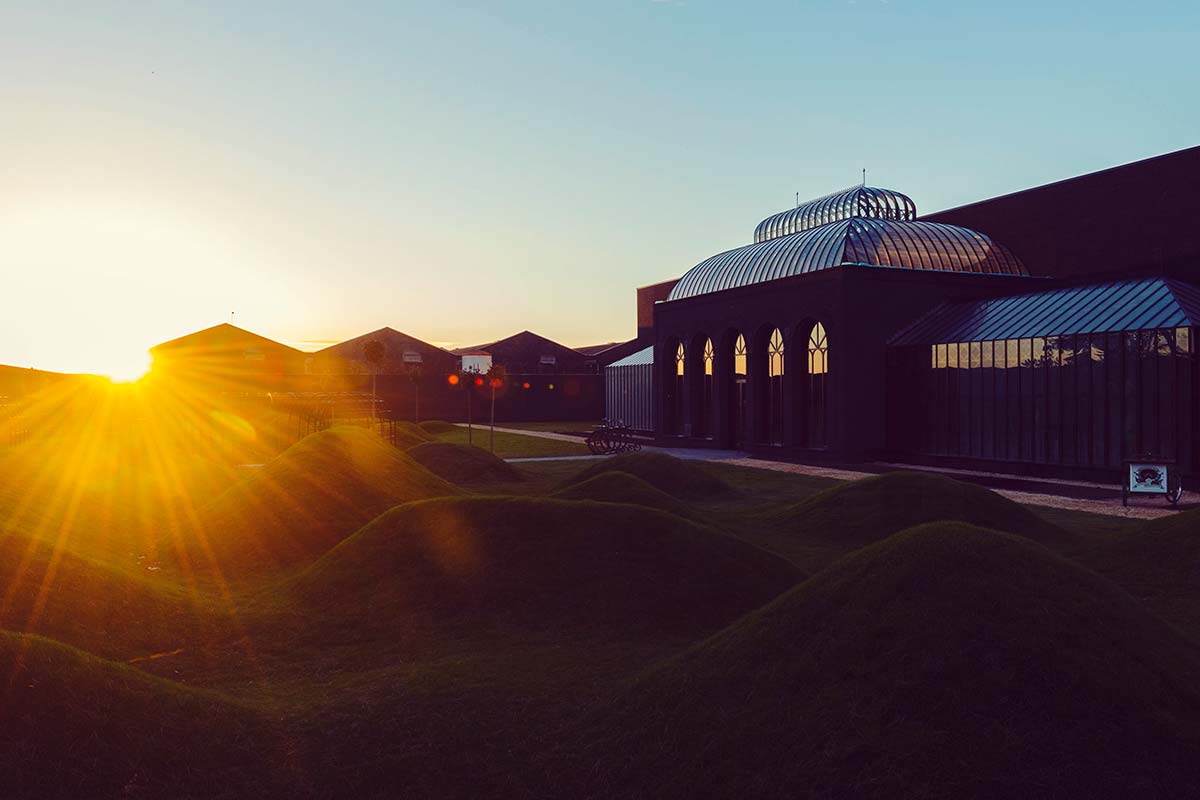 We’re fortunate to be able to use the wonderful water from the Penwhapple Reservoir in our gin but like many gins our key botanicals come from all over the world due to their exotic nature, we’re not able to get the quality botanicals we need up in Scotland but we are experimenting with reintroducing things like juniper up here in Girvan, but as to whether it would be the right quality to use in our gins, only time will tell.

From a production point of view there are no major issues facing Scottish Gin right now to my mind, the main concerns I hear are about the potential for punitive trade tariffs to be extended to gin from big markets like the U.S. but I don’t get too bogged down in the commercial side of things, I leave that to the others. I’m happiest when I’m making gin, experimenting in my lab and tending to my plants in my wonderful hothouses. 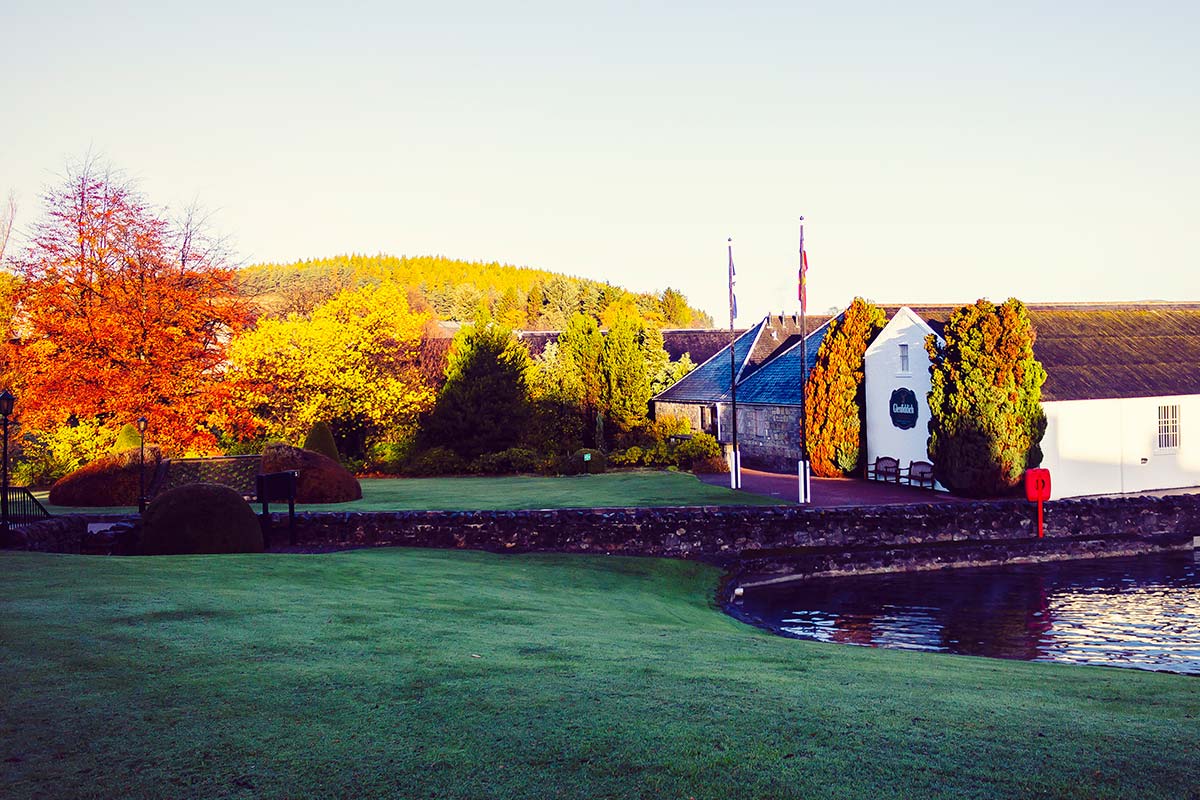 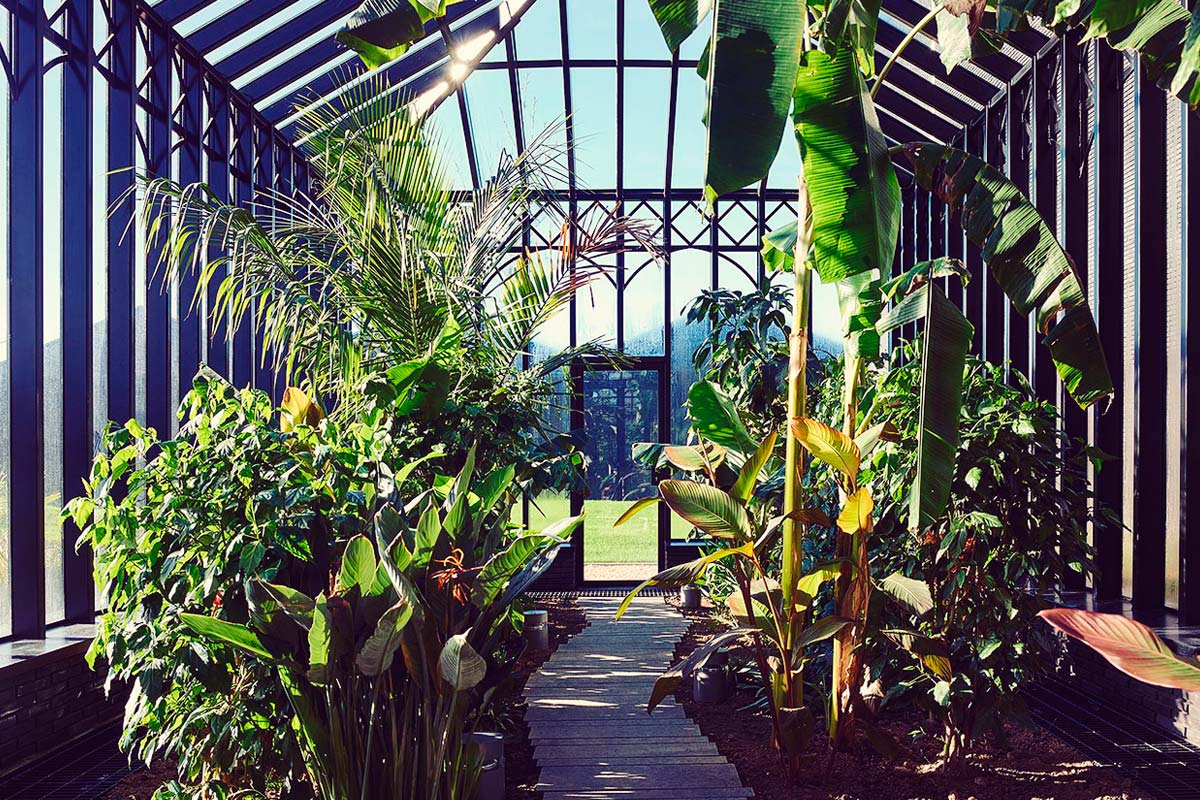 All distilleries have their own magic but Glenfiddich, under the watchful eye of Brian Kinsman, our Master Blender, does some incredibly innovative and exciting liquids. The balance of flavours from the spirit and different woods are amazing and I love to visit there and see what else he has conjured up.

Where do you see Hendrick’s Gin and Scottish Gin as a category in 10 years’ time?

Scottish Gin and Hendrick’s Gin have seen explosive growth over the past 10 years and are really well respected worldwide. The success has been in large part down to quality and care that goes into crafting these gins. Hendrick’s is already available now in over 90 different countries around the world and I expect we’ll see some of these emerging markets become more important over the next 10 years as the ginaissance takes a more international turn. 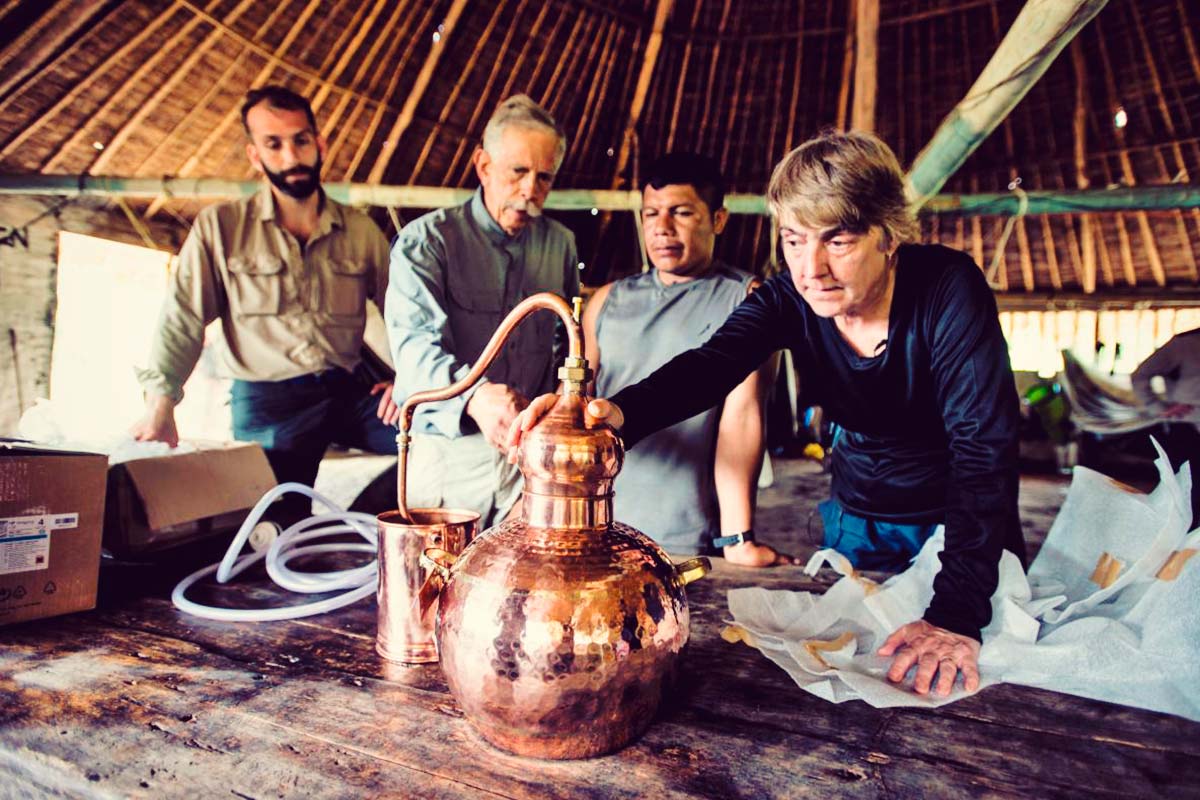 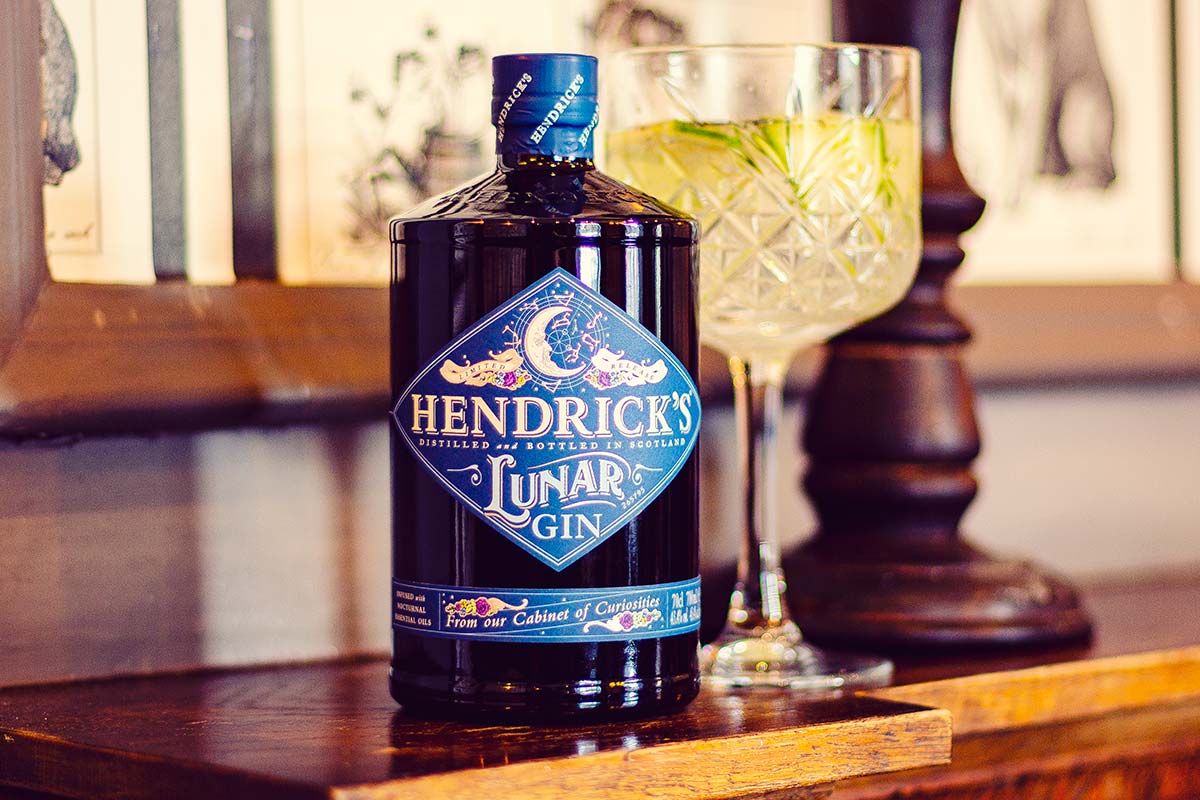 You can learn more about Hendrick's Gin by visiting the links below. 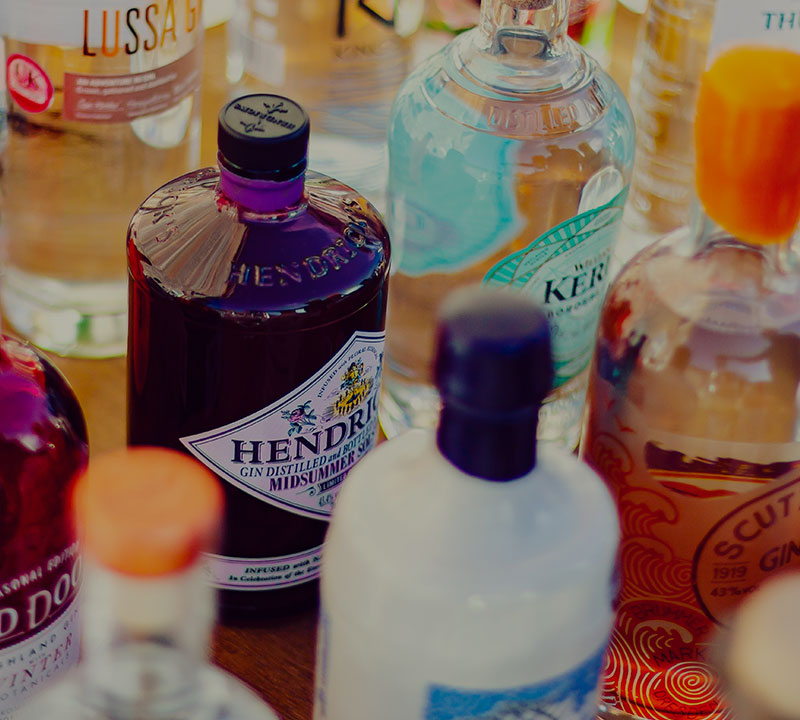