It goes without saying that gin is in demand. New gin expressions have fuelled consumer demand and consumer demand for new gins have helped inspire gin brands. With the introduction of new contemporary gins including pink gins, fruit gins and the revival of old classic styles like the Old Tom, gin has sat centre stage.

In particular, Scottish Gin over the last decade has slowly grown, evolving and building its own identity and reputation. Thanks in part to the Scottish Spirits revolution spurred on by gin production here in Scotland, the demand for Scottish Gin has provided distillers and brand owners the opportunity to explore and develop some rather exciting spirit concepts and products that fit nicely into Scotland’s growing portfolio of world class food and drinks producers. We wanted to look at some of these new spirits being made in Scotland… yes on this occasion, we’re taking off our gin hat and looking at some of the other spirits and drinks being created across Scotland.

There are currently two Absinthe’s distilled and produced right here in Scotland, both undeniably Absinthe, but both individual and unique to the distillers that make them. Originating from Canton of Neuchâtel in Switzerland in the late 18th Century, the drink proved extremely popular amongst the Parisian artists and writers of the late 19th and early 20th centuries. Its famous admirers included Ernest Hemingway, James Joyce, Pablo Picasso and of course Vincent van Gogh.

Traditional botanicals used in the distillation process include wormwood, sweet fennel and green anise, which give some Absinthe’s their green colour and gave rise to the romantic notion that drinking Absinthe could inspire creativity thanks to the ‘Green Fairy’. The idea of the ‘Green Fairy’ was incorporated into many labels and brands at the time and is still used to this day. 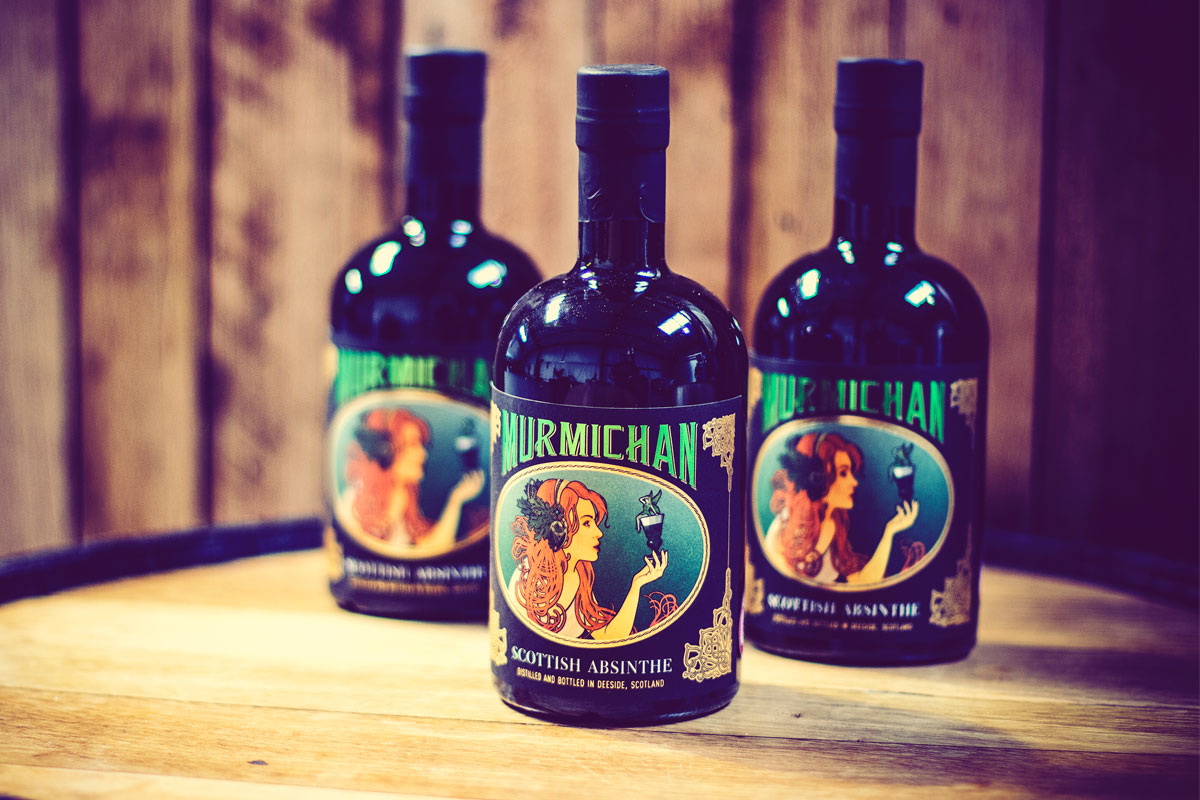 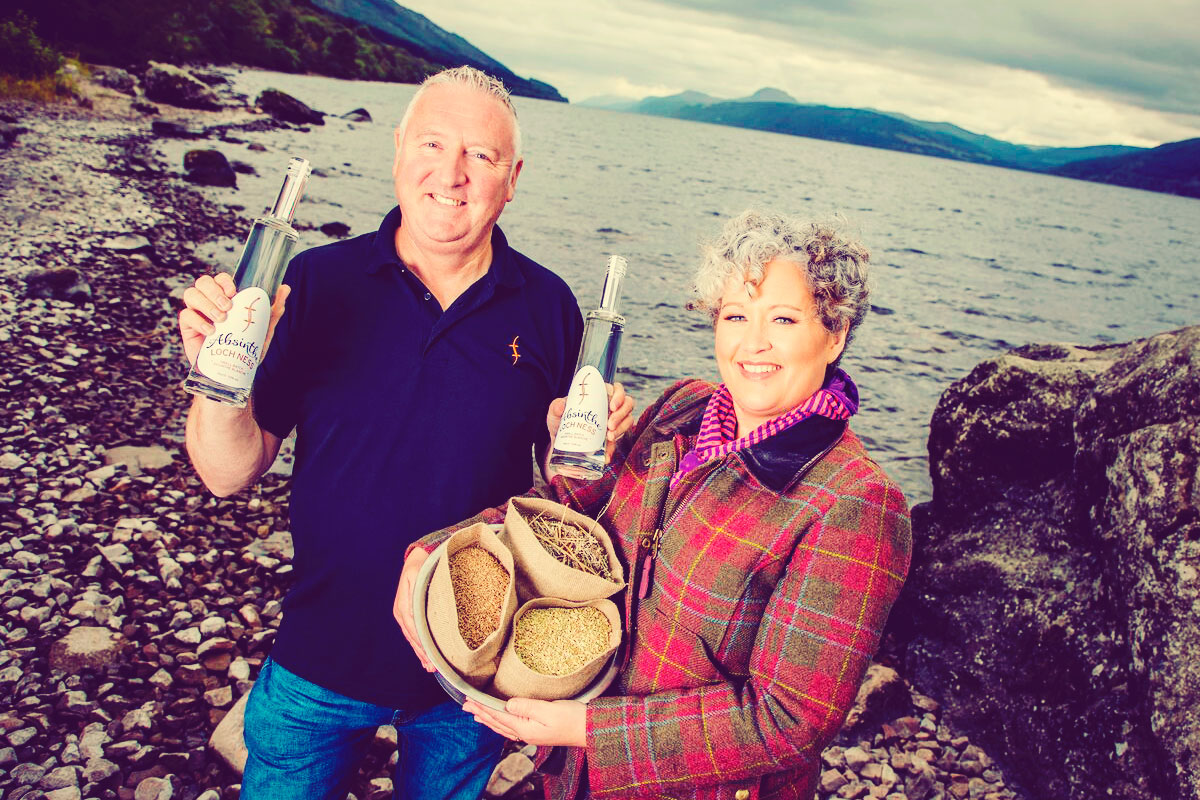 Hailing from the shores of Loch Ness, Loch Ness Spirits Absinthe is also a first for a number of reasons. It’s the first Absinthe to use Scottish wormwood along with other traditional botanicals found in Absinthe including aniseed, fennel and the Black Gold Juniper that’s unique to the hillsides of Loch Ness. Loch Ness Spirits were also the first UK company to win Gold for their Absinthe in the Absinthe Blanche category at the highly respected Absinthiades Festival in Pontarlier in France… and distiller Lorien was also the first female distiller in the competition’s history to win a Gold.

Often described as the bartenders friend, thanks in part to its clear appearance and relatively odourless nature, providing the perfect base spirit for use in cocktails. Said to originate from 14th century Balkan states including Russia and Poland, it’s been suggested that vodka was created by monks and to begin with contained very little alcohol. According to research, an ABV of 14% may have been the norm for the first vodkas distilled.

Originally made using fermented potatoes, it was commonly used for medical purposes and was the perfect antidote to the harsh and freezing cold winters encountered in the Balkan states. Vodka was also given to help “increase fertility and awaken lust” amongst other things. The use of the word Vodka, which in diminutive Slavic translates as water, was first recorded in court documents from 1405. Over the centuries styles of vodka have came and went and some regions in Poland and Russia still produce their own variations based on centuries old recipes. Modern vodkas can be distilled using fermented cereal grains or potatoes with some brands using fruit or sugars as the base for the distillation.

One of the first Scottish Vodkas, Holy Grass Vodka from Dunnet Bay Distillers uses the unique Holy Grass in the distillation. Holy Grass was discovered on the banks of river Thurso and was once used for basket weaving and laid church floors to give a sweet vanilla smell. The distillation also uses Highland apples, which combined with the Holly Grass, creates a slightly sweet but fresh flavour profile with a creamy finish. 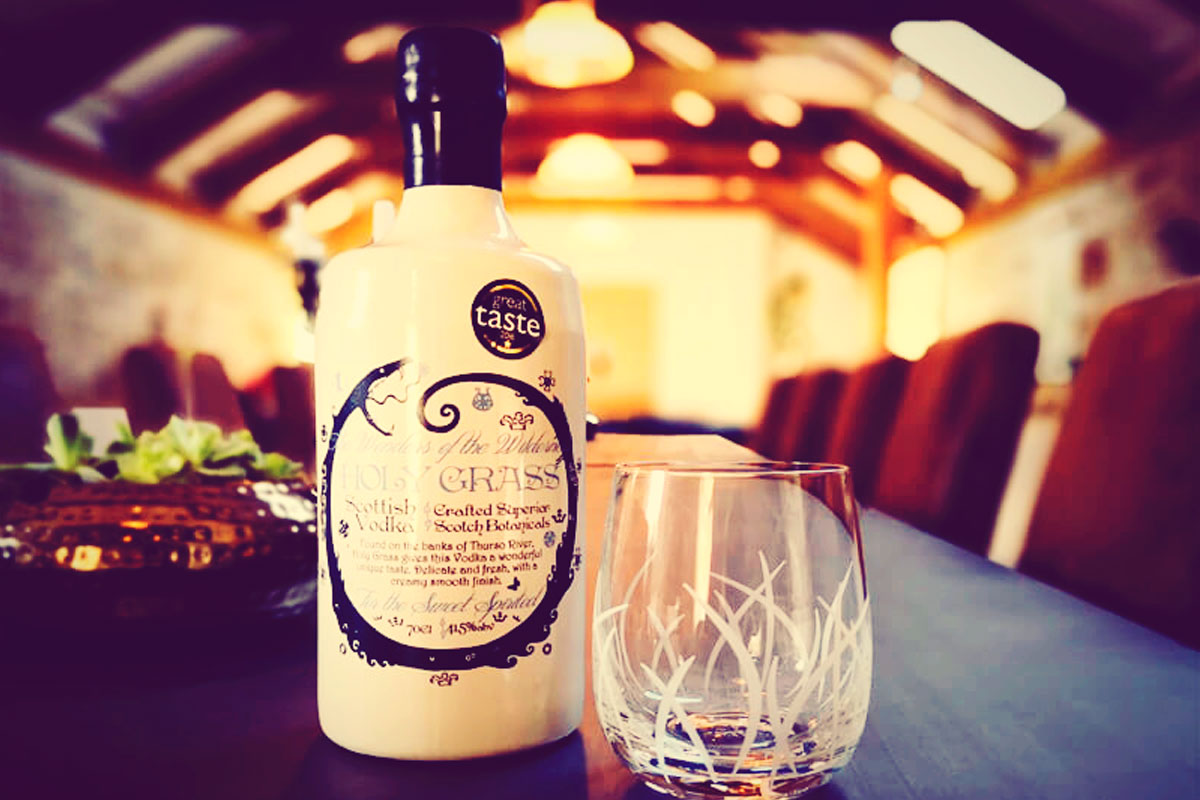 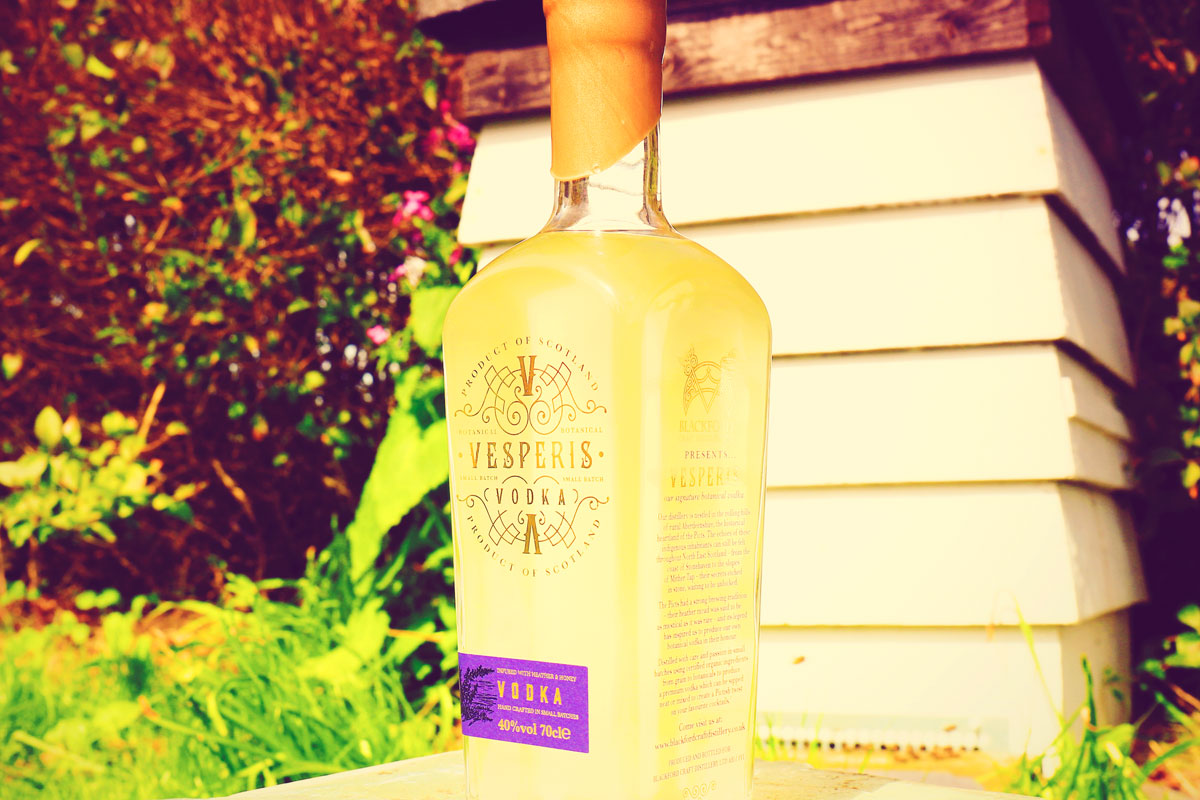 Introduced in 2018, Heather Honey Vodka from Blackford Craft Distillery in Aberdeenshire proved an instant smash picking up a Gold for Best Product at Scotland’s Speciality Food Show. Based on their Pictish Botanical Vodka but with the addition of raw heather honey and then left to macerate for a number of weeks before being bottled. A savoury, sweet Scottish Vodka that can be enjoyed neat over ice with rich notes of heather and honey.

Known for their award-winning range of gins, Isle of Skye Distillers introduced their Misty Isle Vodka in 2018. A triple distilled vodka made using water from Storr Lochs on the Isle of Skye and also the first Vodka to be made on the island, Misty Isle Vodka has a light, refreshing flavour profile that can be enjoyed neat over ice. 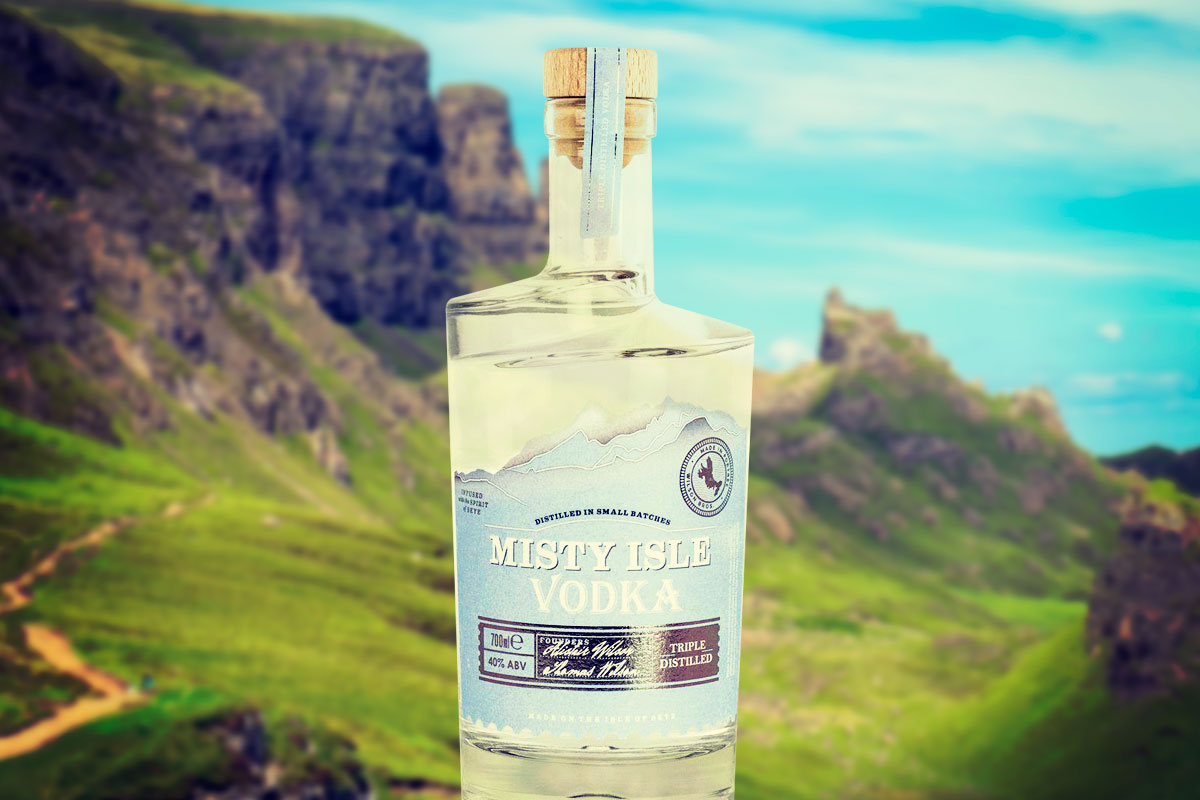 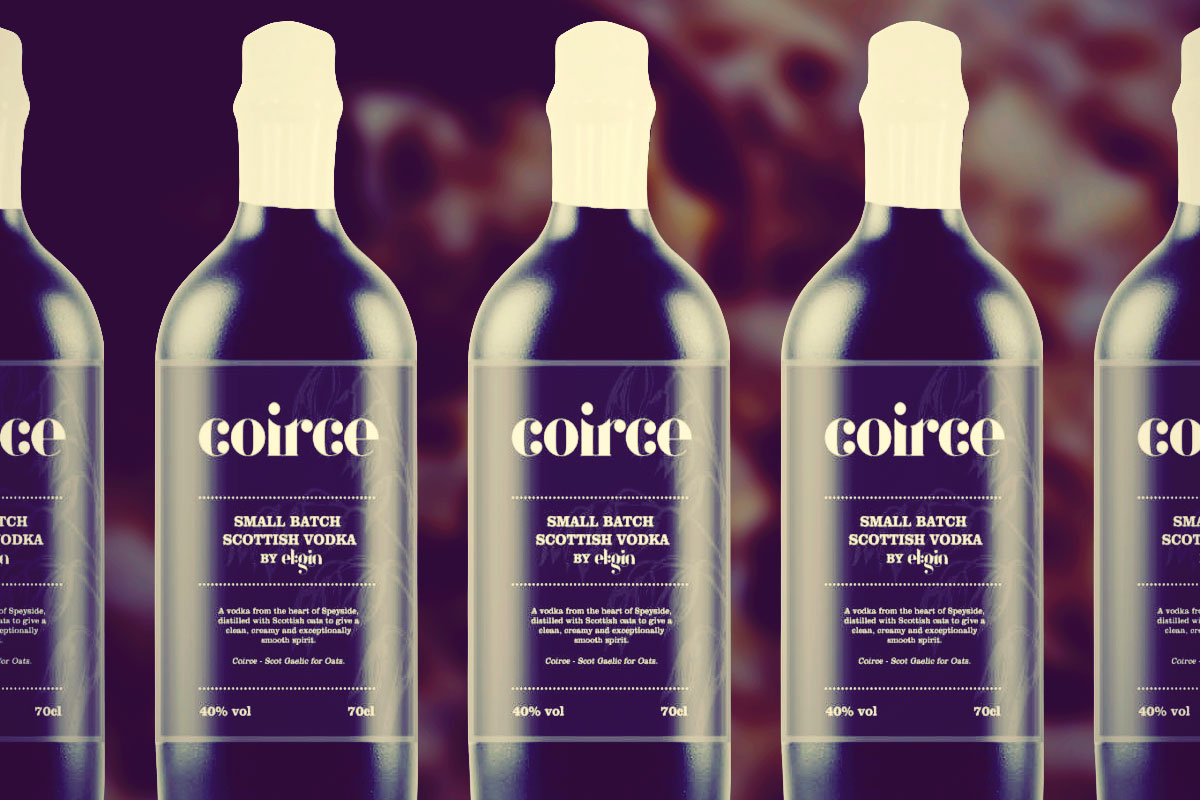 Based in Moray, a region closely associated with Speyside and distilling, Coirce Vodka from El-Gin has Scottish Oats at its heart. The use of carefully selected Scottish Oats in the distillation gives this vodka a creamy flavour profile with a clean and exceptionally smooth mouthfeel and finish.

Into The Wild Vodka, Deerness Distillery

The first vodka to be made on Orkney, Into The Wild Vodka is an award-winning vodka from the team at Deerness Distillery. Distilled and bottled at the Deerness Distillery in the Parish of Deerness on Orkney, the vodka is made with Orcadian water to create a smooth, clean, crisp vodka that can be enjoyed neat over ice. 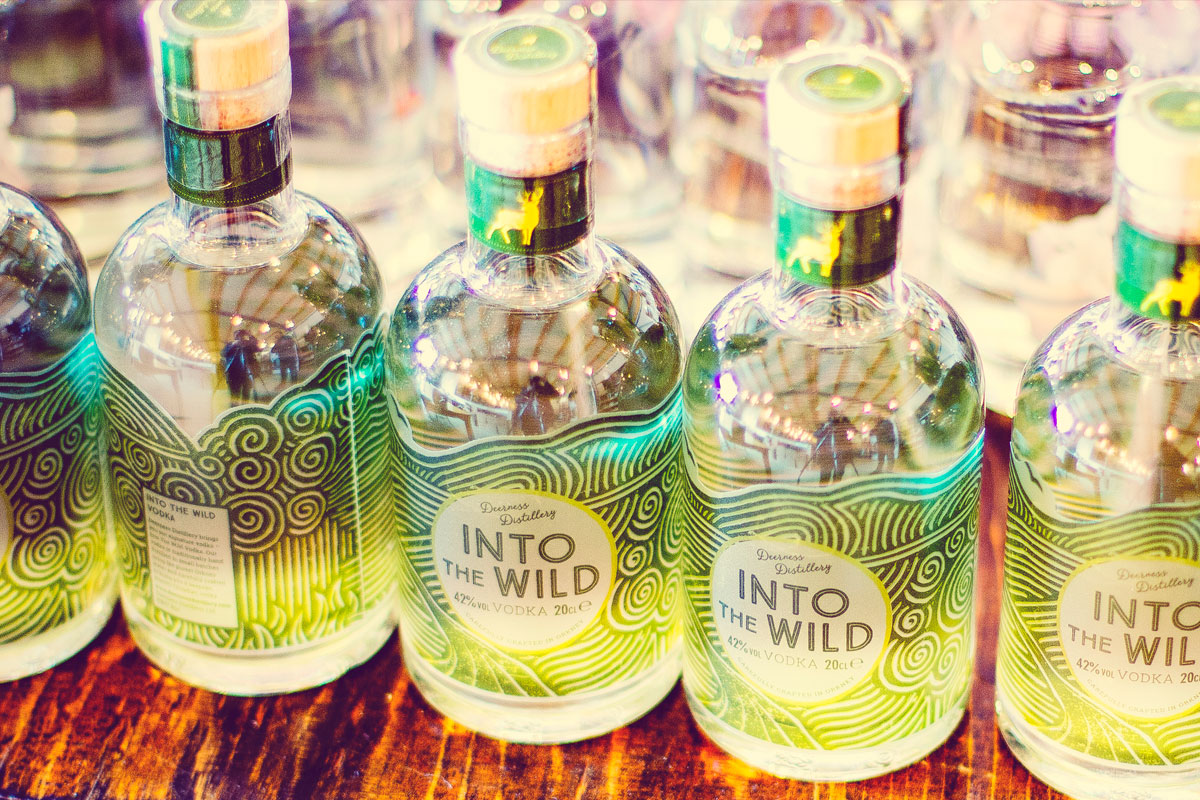 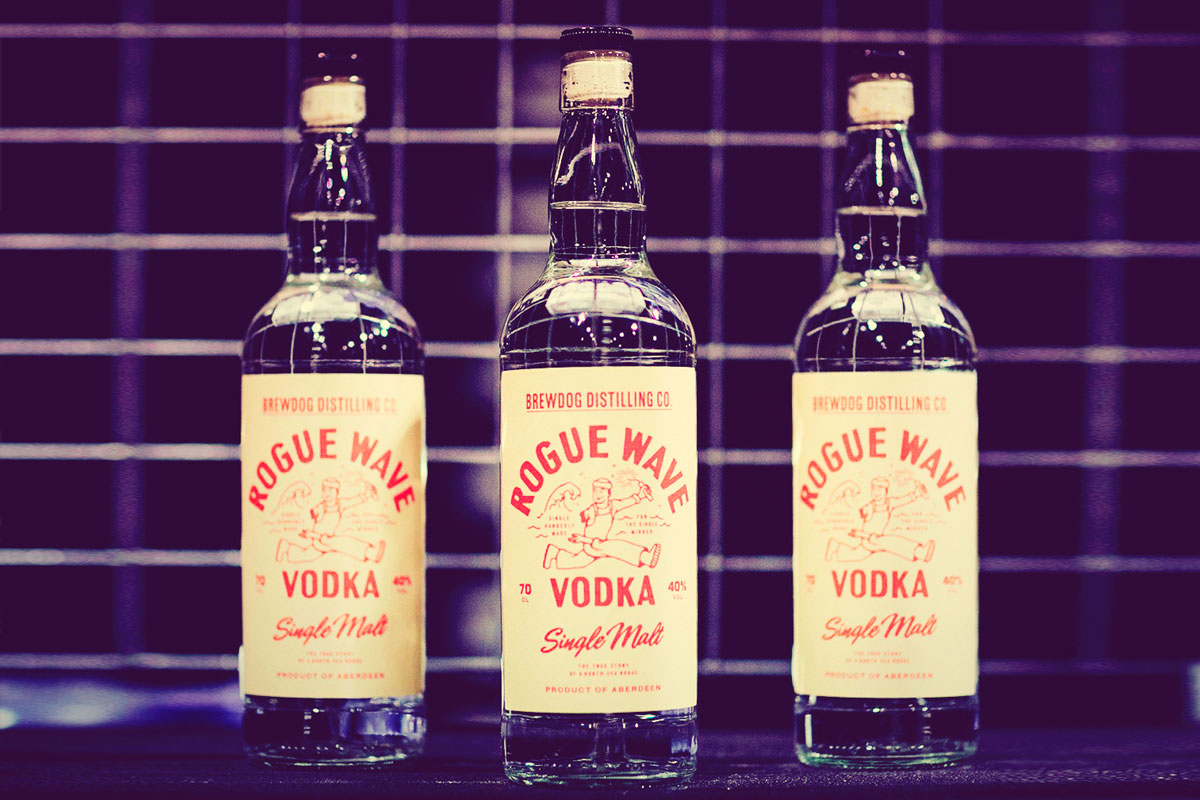 Due for release soon, Rogue Wave Vodka is part of the new spirit expressions from Brewdog Distilling Co. Rouge Wave, a single malt Vodka, is said to be inspired by BrewDog founder James Watt’s cousin, ‘one-armed Alex’, who “dived head first into life after the worst of days at sea”. The vodka is filtered once to keep it’s soul intact.

The image of rum used to be one of tropical islands and pirates. Thankfully the pirate part has slowly disappeared as rums image as a premium crafted drink has slowly replaced the image of eye patches and parrots. A big part of the change is thanks in part to the quality of spirits being produced and a wider range of rum cocktails now available behind most bars.

Made from sugarcane or sugar based byproducts such as molasses, rum is created using both distillation and fermentation with rum normally aged in oak barrels. Most of the world’s rum is produced in the Caribbean and Latin America but that hasn’t stopped Scottish distillers from seeking to make their own mark on the category.

Made using freshly pressed sugar cane from the Island of Maderia, Banditti Club Spiced Rum is matured and spiced in Glasgow by The Glasgow Distillery Company, the team behind Makar Gin and the 1770 Whisky expressions. Aged for 12 months in oak casks and spiced with a selection of exotic spices and tropical fruit including cacao, allspice, orange and pineapple creating sweet, warm notes of clove and anise with a spicy finish. The name The Banditti Club comes from a company of bold rogues who meet in Glasgow’s local public houses, often singing, eating, drinking and playing music late into the night. 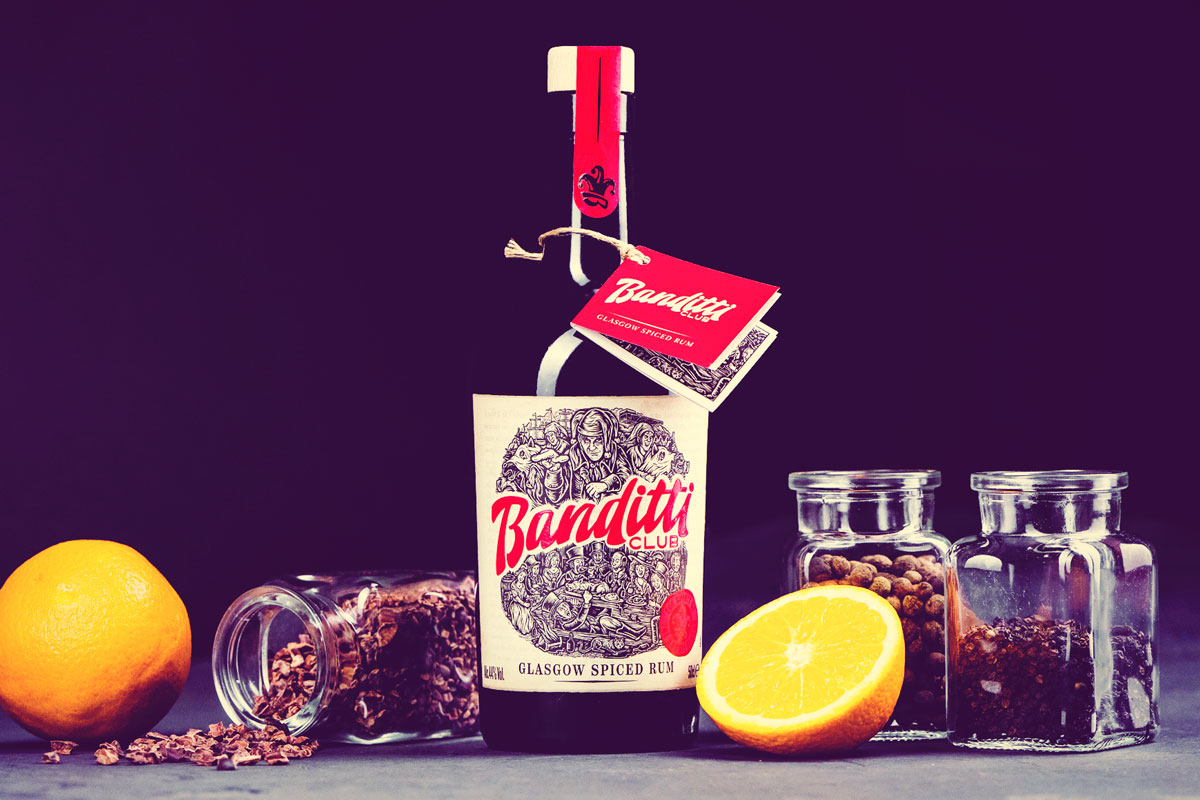 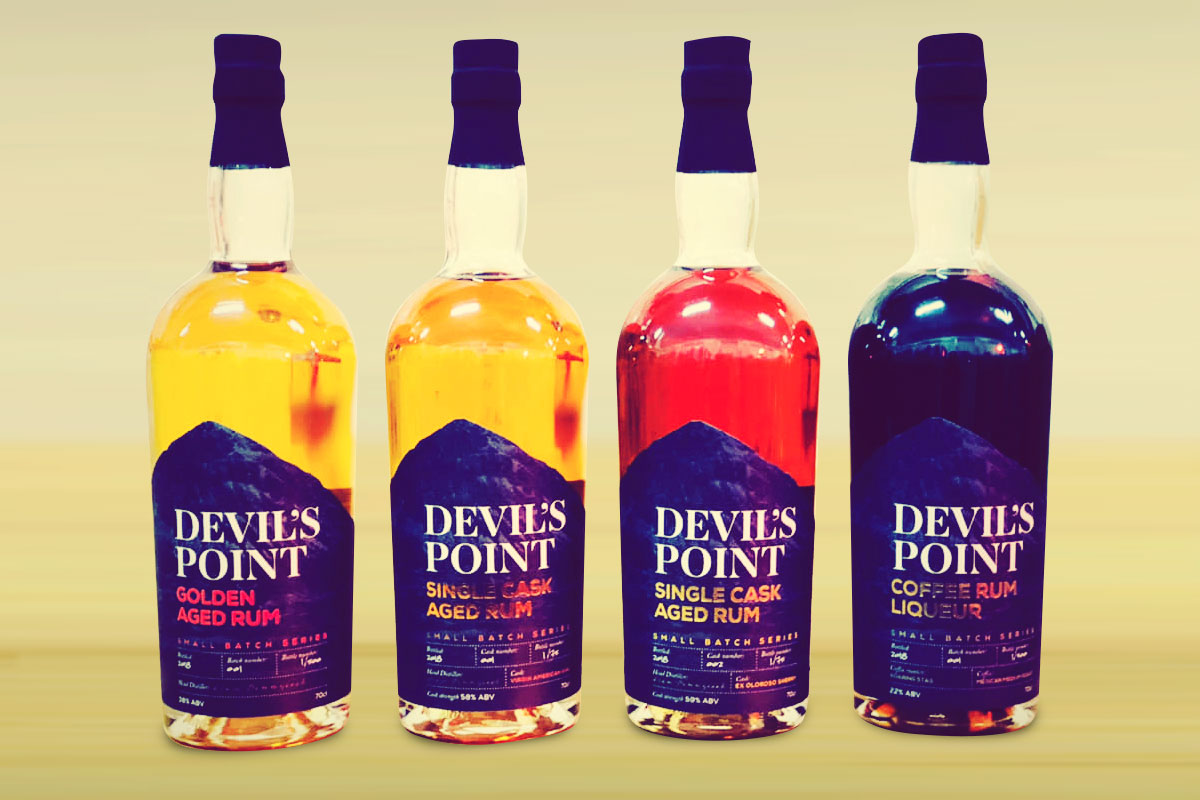 A world’s first, this rum is aged in charred hemp stalks and also the UK’s first hemp infused rum. This rum also features bell heather honey and water sourced from Royal Deeside. The use of hemp is no gimmick either. The couple behind the The Wee Hemp Spirits Company, Calum and Rebecca, discovered that Cannabidiol (CBD) oil helped Rebecca’s chronic Crohn’s disease and fibromyalgia syndrome (FMS) as part of her treatment plan. Canna’B Rum has a smokey yet sweet finish with a smooth, rich and creamy mouthfeel. 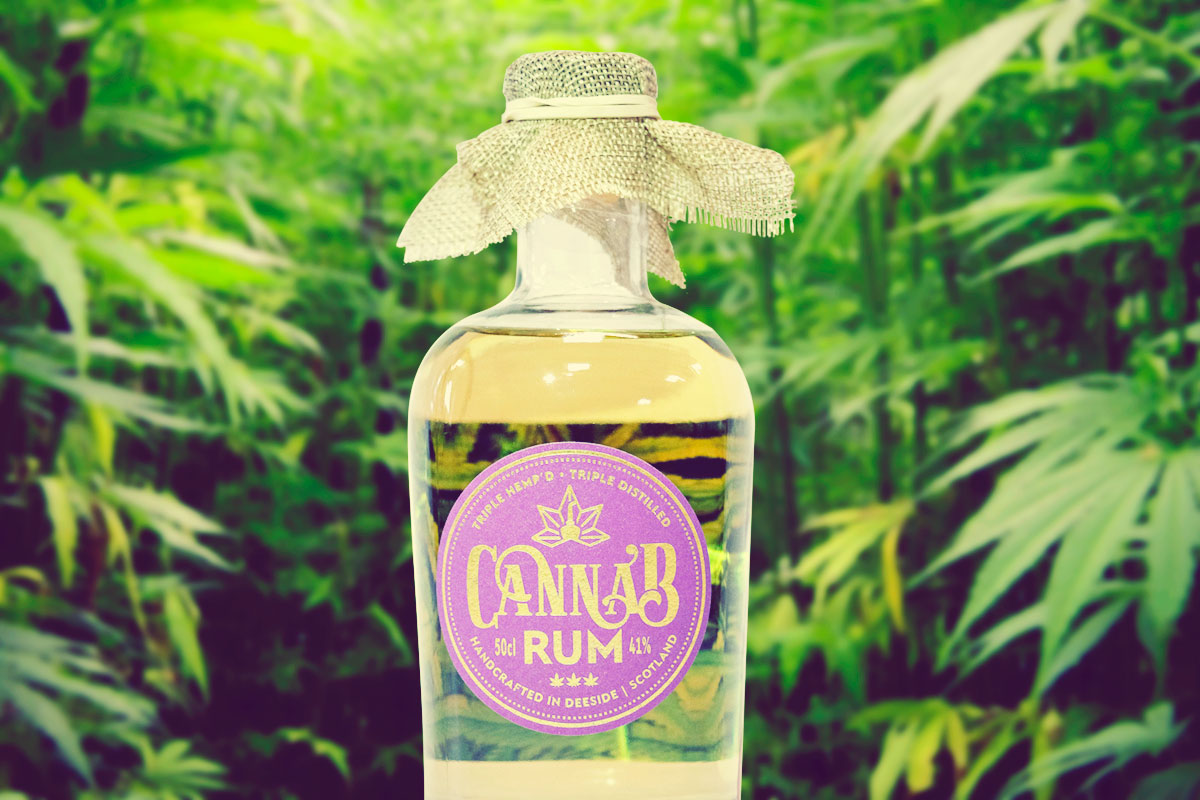 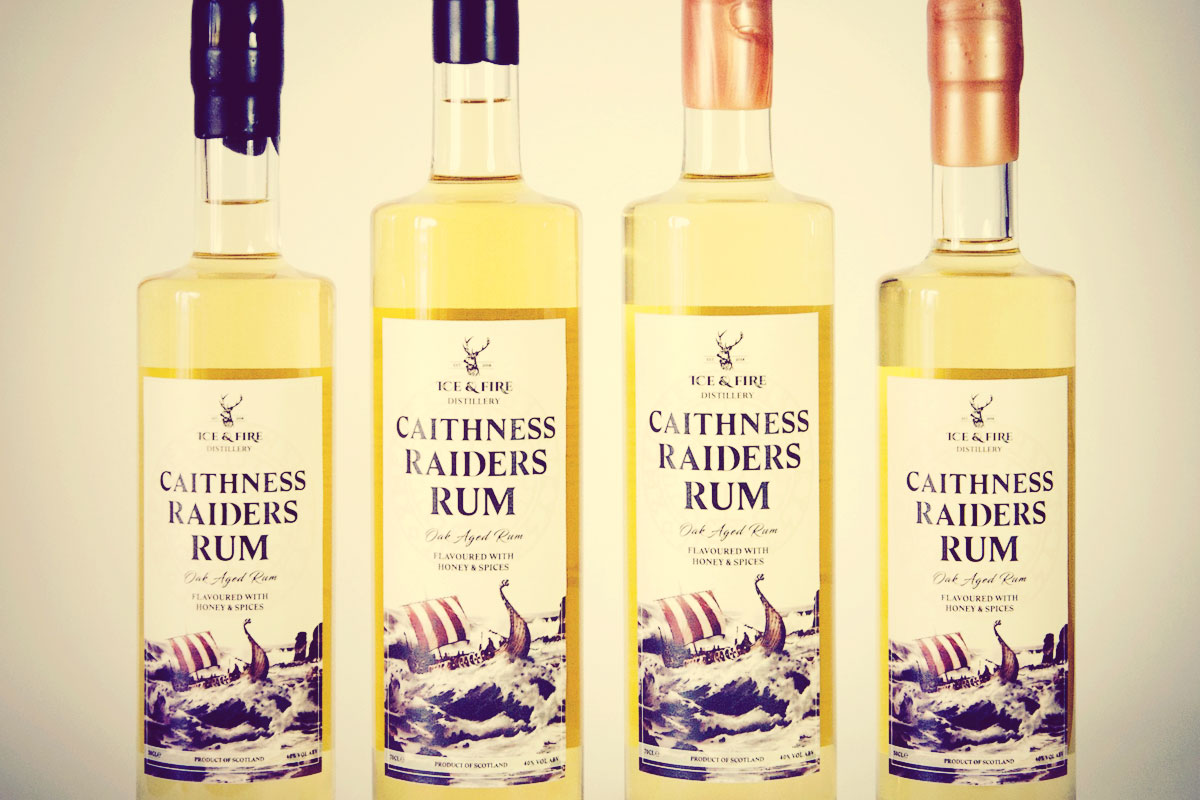 The recently released Caithness Raiders Oak Aged Rum features both honey and a variety of spices and a hint of coconut from the use of gorse. A sweet yet spicy flavour profile with hints of vanilla, coconut, warmth and a rich full bodied flavour profile that can be enjoyed neat over ice or topped up with ginger ale.

As Scottish distillers and rectifiers continue to raise the bar for Scottish Spirits, there’s also been lots of room for experimenting, creating and innovating. From old family recipes to world firsts, the room for new creations, spirits and drinks has no boundaries.

What do you get when you combine an award-winning Scottish Gin with pineapples, oranges and a fire? The world’s first distilled cocktail. The Smokey & Citrus Distilled Cocktail from Crafty Distillery uses their award-winning Hills & Harbour Gin as a base with smoked pineapples and oranges and wheelbarrow’s worth of fresh fruit in each batch. The fruit is hand-smoked, torched, macerated and pressed to extract all the flavours before being distilled. With big flavours and lots of heart, the use of Hills & Harbour gin helps balance a complex drink that can be enjoyed neat over ice but can also be changed to suit personal preference with the addition of tonic, soda or lemonade with each mixer creating a unique drink. 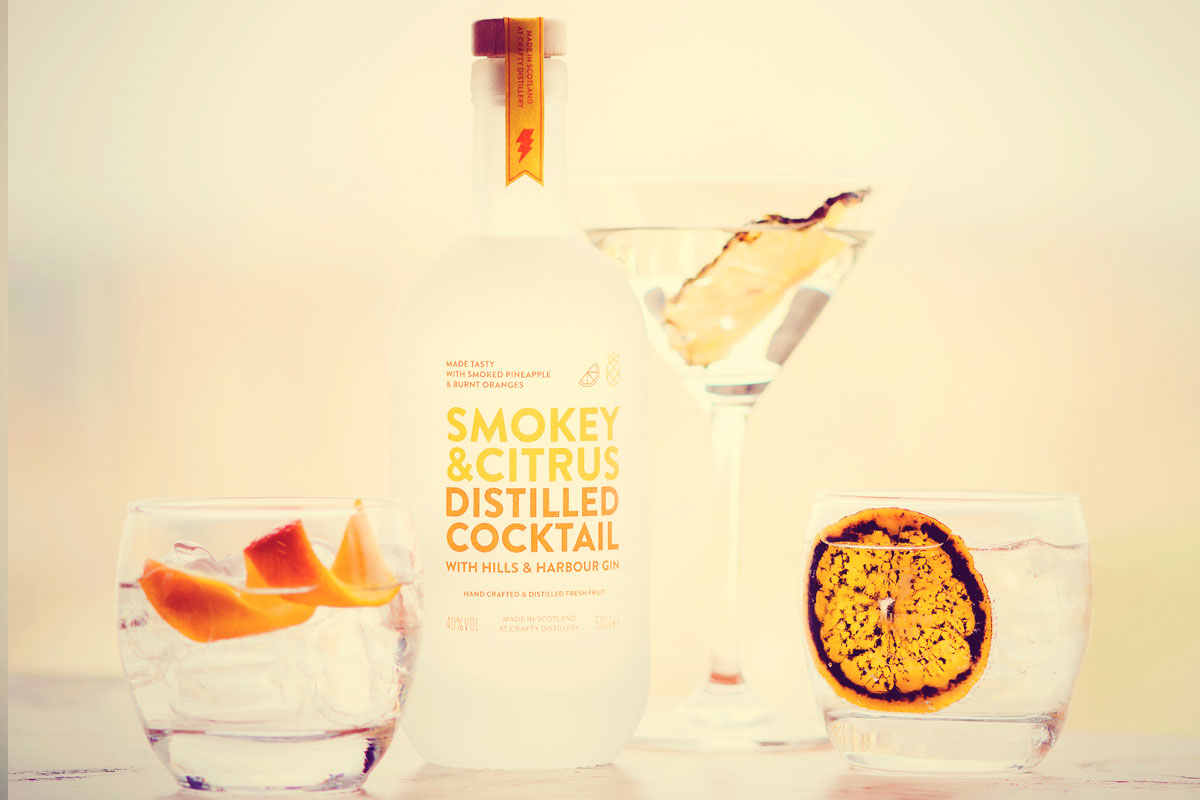 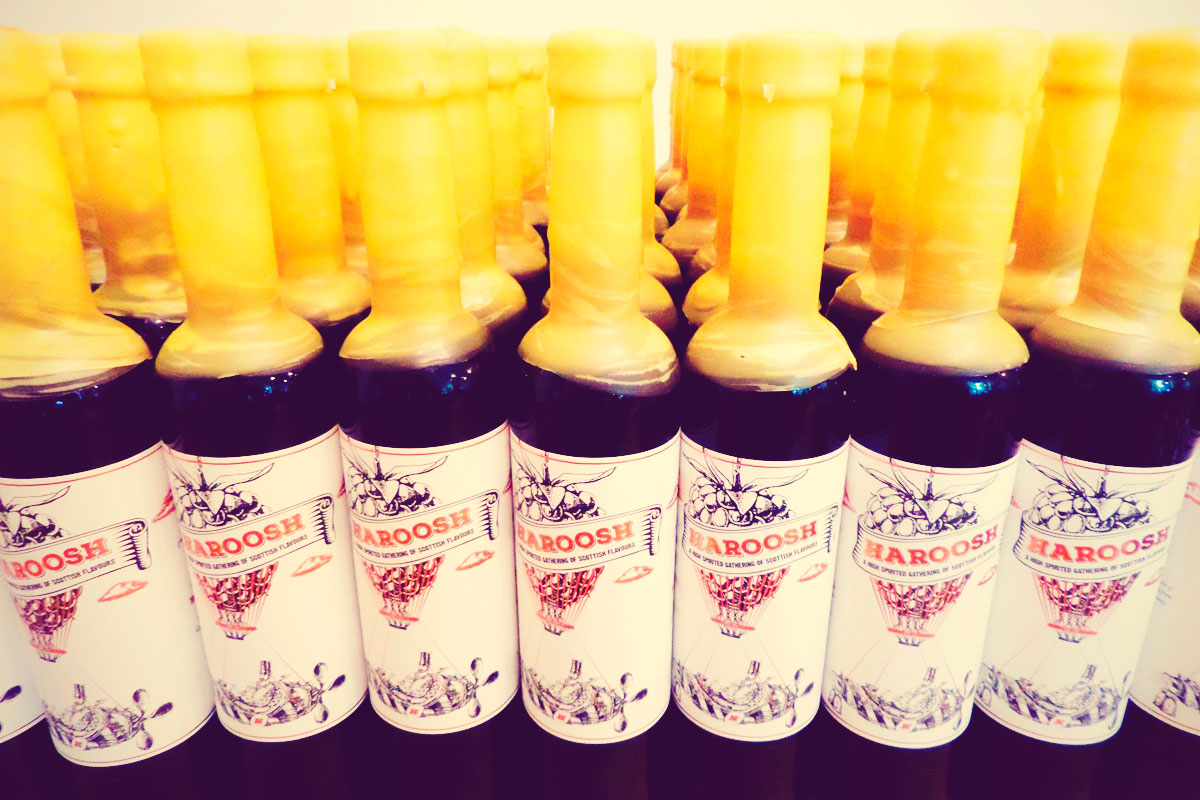 A family recipe that was passed down from generation to generation that uses freshly foraged Brambleberries, honey and whisky, left to macerate before being enjoyed neat. The recipe was passed down the family tree before distiller Pete Dignan at Lost Loch Spirits decided it was so good it should be shared. Includes three strains of honey including heather, clover and willow herb, all sourced from a local bee keeper.

Berry Good is the brainchild of Jill Brown, distiller of Avva Scottish Gin. Established in 2008, Berry Good offers a variety of spirits and liqueurs including Scotland’s first Scotland’s first Limoncello, which Jill launched in 2015. Cofaidh Cold Brew Liqueur uses freshly roasted coffee beans with each batch different in flavour and appearance based on the coffee bean used in the process. A perfect after dinner drink for sipping neat over ice or the perfect partner for Espresso Martini. 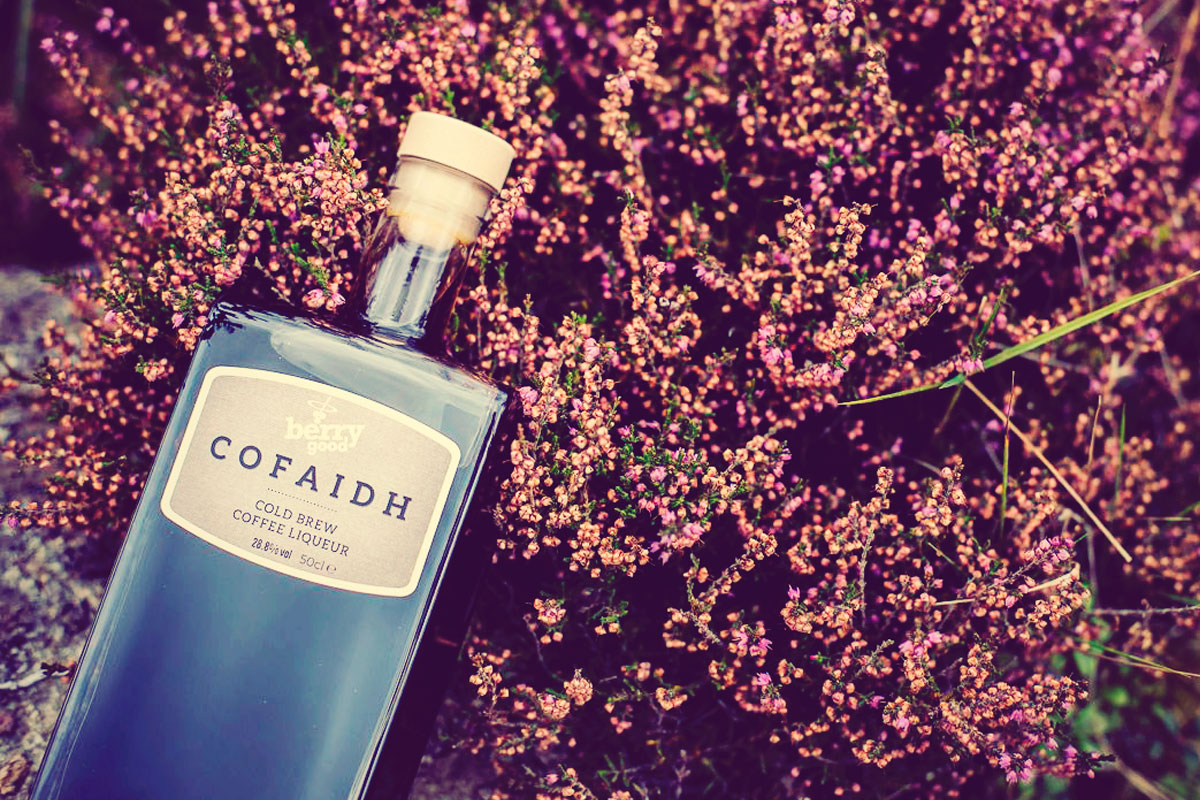 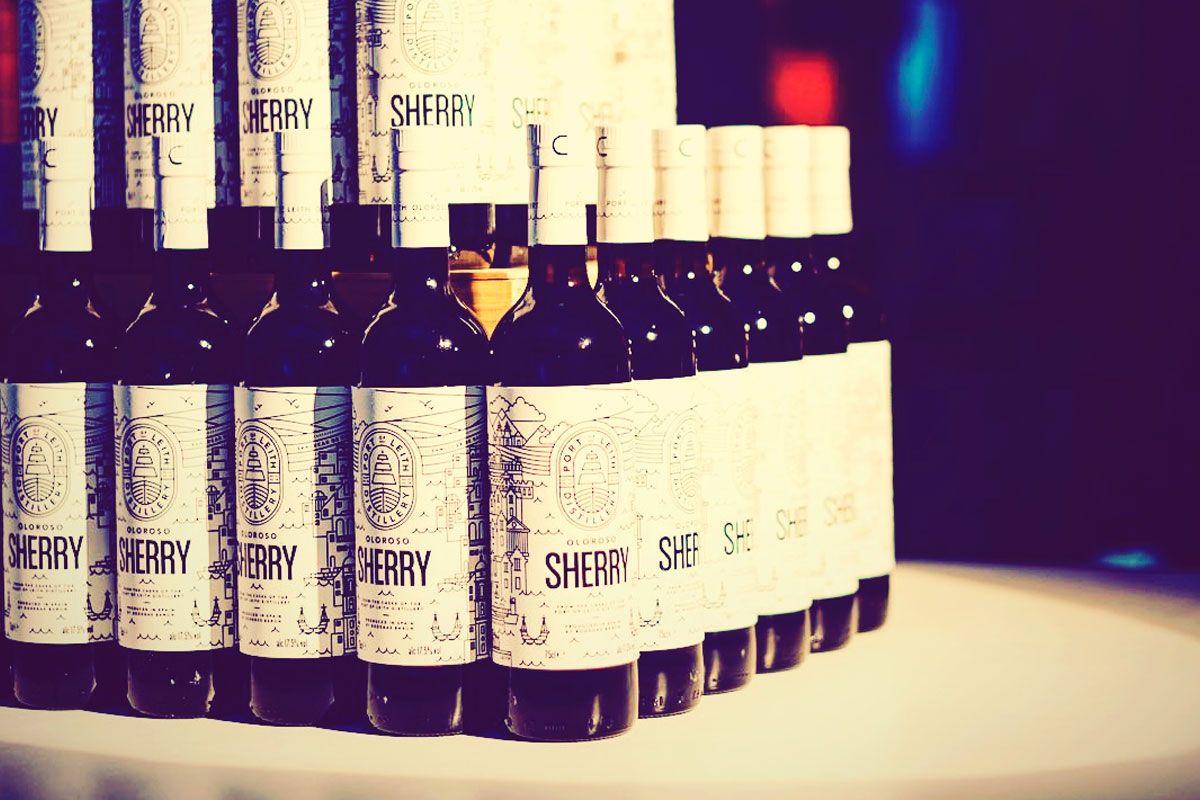 With plans currently underway for Scotland’s first vertical distillery, the team at the Port of Leith Distillery aren’t afraid to push boundaries. As part of their long term plan for their whisky distillery, they always knew that their selection of casks would have a significant role in shaping their new make spirit into what would one day be their whisky. Sourced from Bodegas Baron, a 480 year old producer, the matured Oloroso wine will be used to age the casks before they are shipped to Scotland to be filled.

Rather than option to buy old sherry casks, the Port of Leith Distillery have had a number of new casks built for the task. Not only that but they’ve also produced their very own sherry to fill them. Created using the Solera System, where a series or barrels are used to age older and new wines before the final wines from the last barrel in the series are bottled. It’s this slow but time honoured process that creates a beautiful, rich sherry. 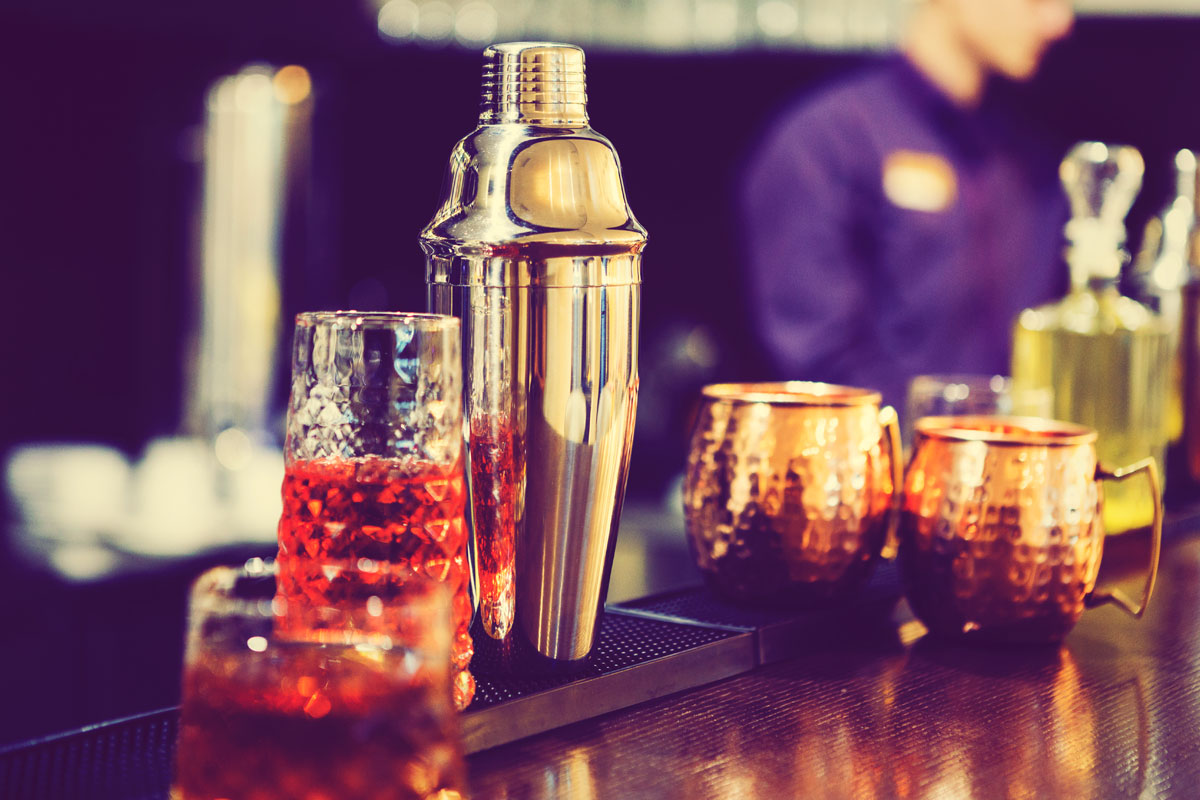 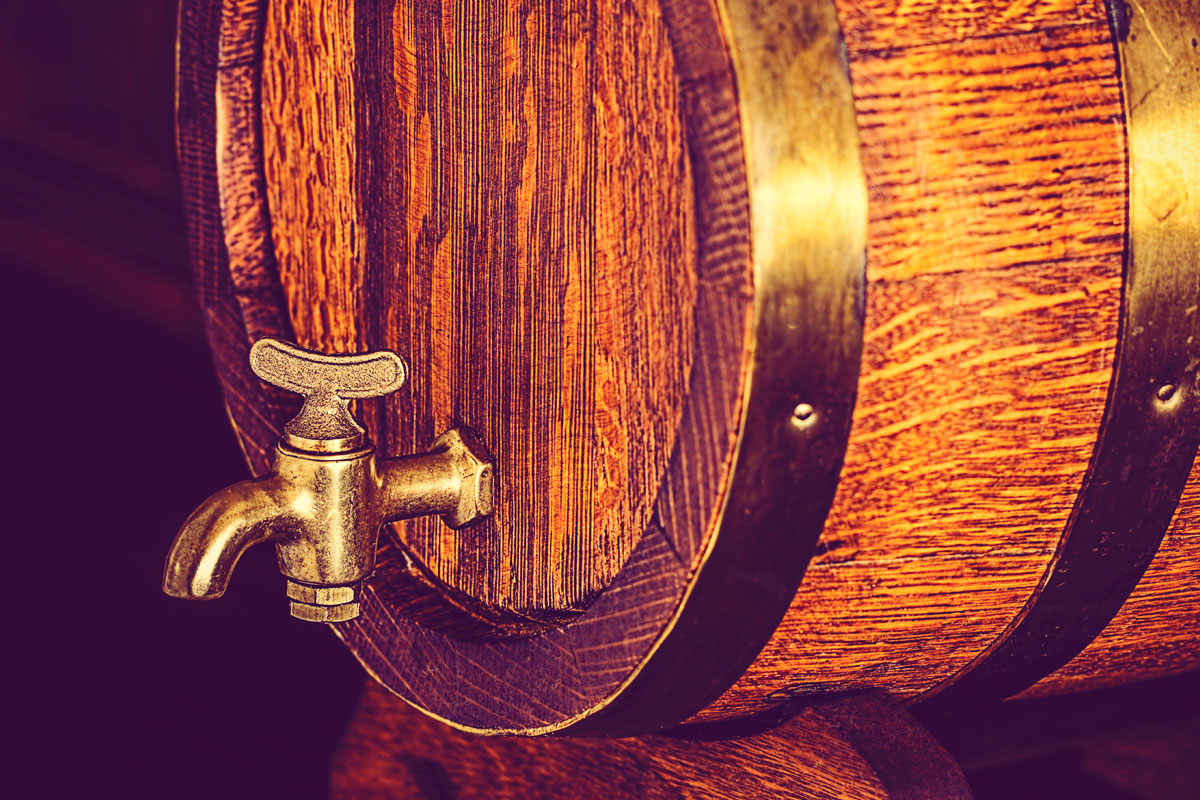 You can learn more about these Scottish Spirits brands via our Scottish Gin Directory. 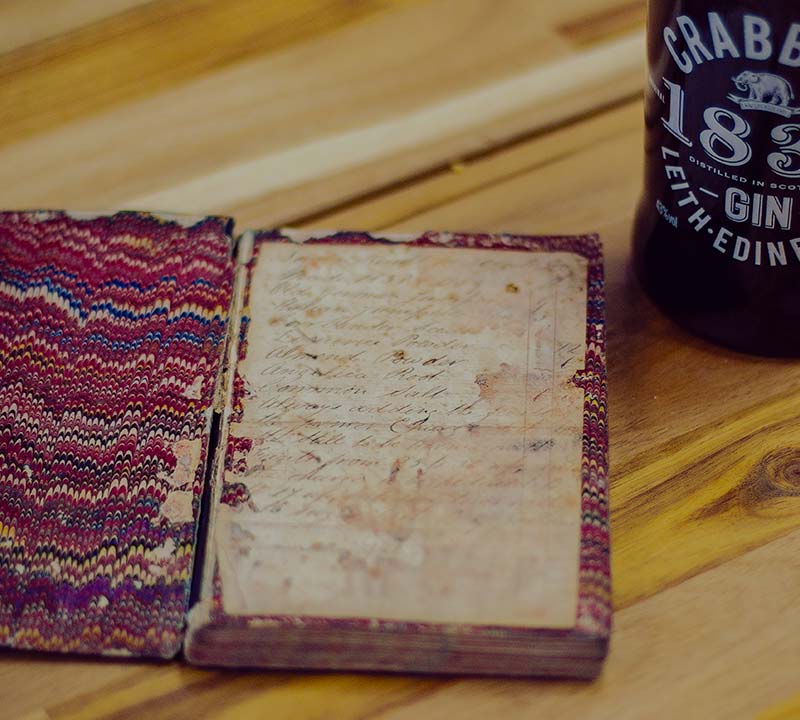 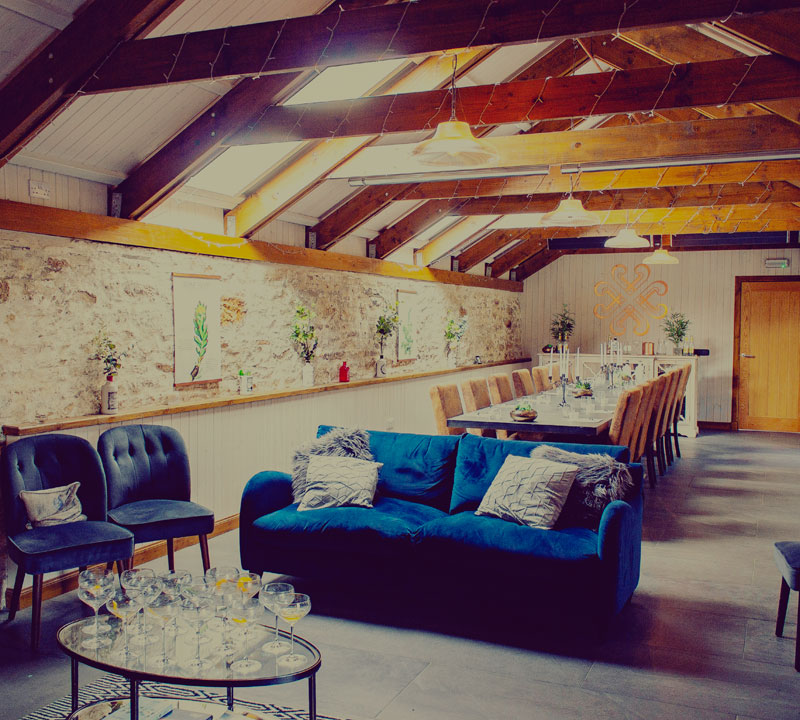