There’s no such thing as an average day in the world of Scotland’s gin makers and business owners. Charging the still for the next distillation, keeping on top of logistics and dealing with suppliers, co-ordinating and attending gin events and trade shows… changing nappies and looking after the kids, feeding the chickens and foraging for botanicals. We spend the day with Scotland’s growing number of Scottish Gin makers and business owners to find out what really goes on in a day in the life. One thing is for sure, there’s never a dull day in the world of Scottish Gin.

In this feature, we caught up with Colin McLean, founder and maker of McLean’s Gin. Based at his home and gin lab on the outskirts of the market town of Strathaven, in South Lanarkshire, Colin has continued to grow his business and range of Scottish Gin expressions since his early days of cold compounding from his cupboard in his old Glasgow flat. In fact, at one point, it was suggested that McLean’s Gin upon launch was one of, it not the, smallest gin producer in Europe. A lot has changed since Colin launched McLean’s Gin in 2017; he got married, moved home, started a family and produced not one but two distilled gins along with his range of compounded gins. We catch up with Colin to see what it’s like to step into his shoes for the day. 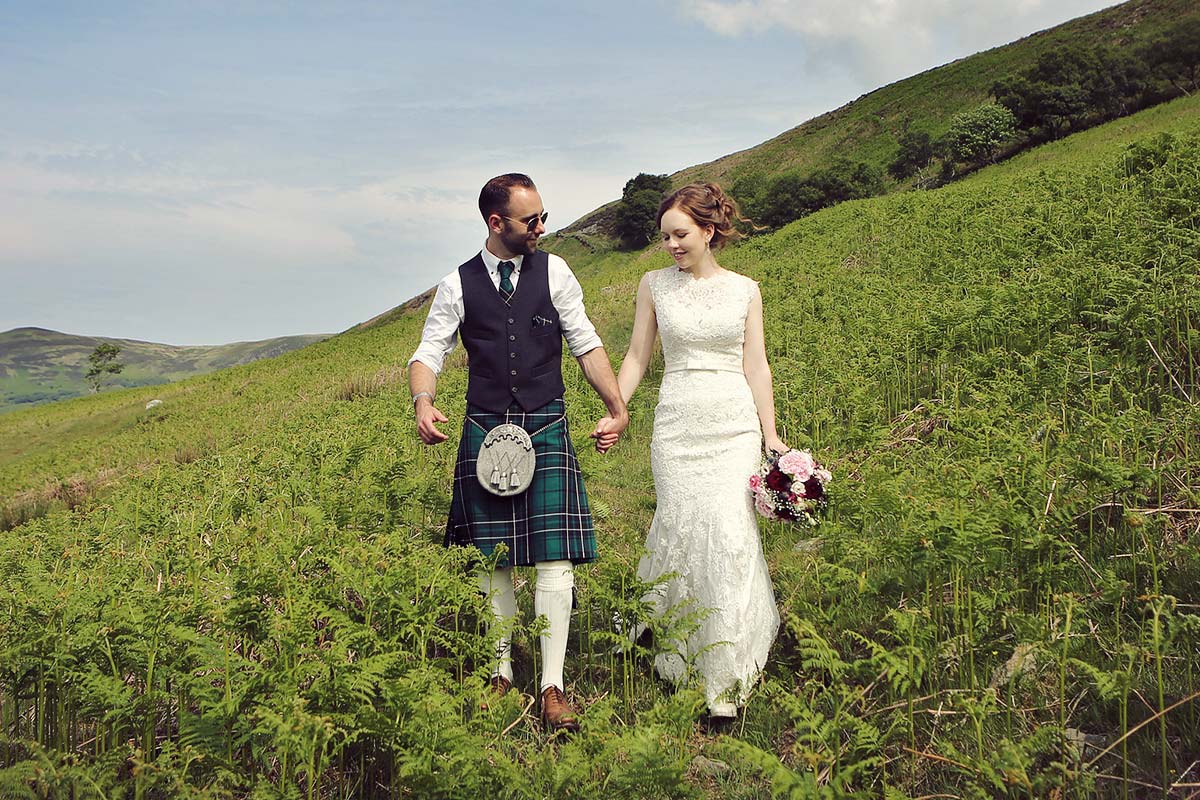 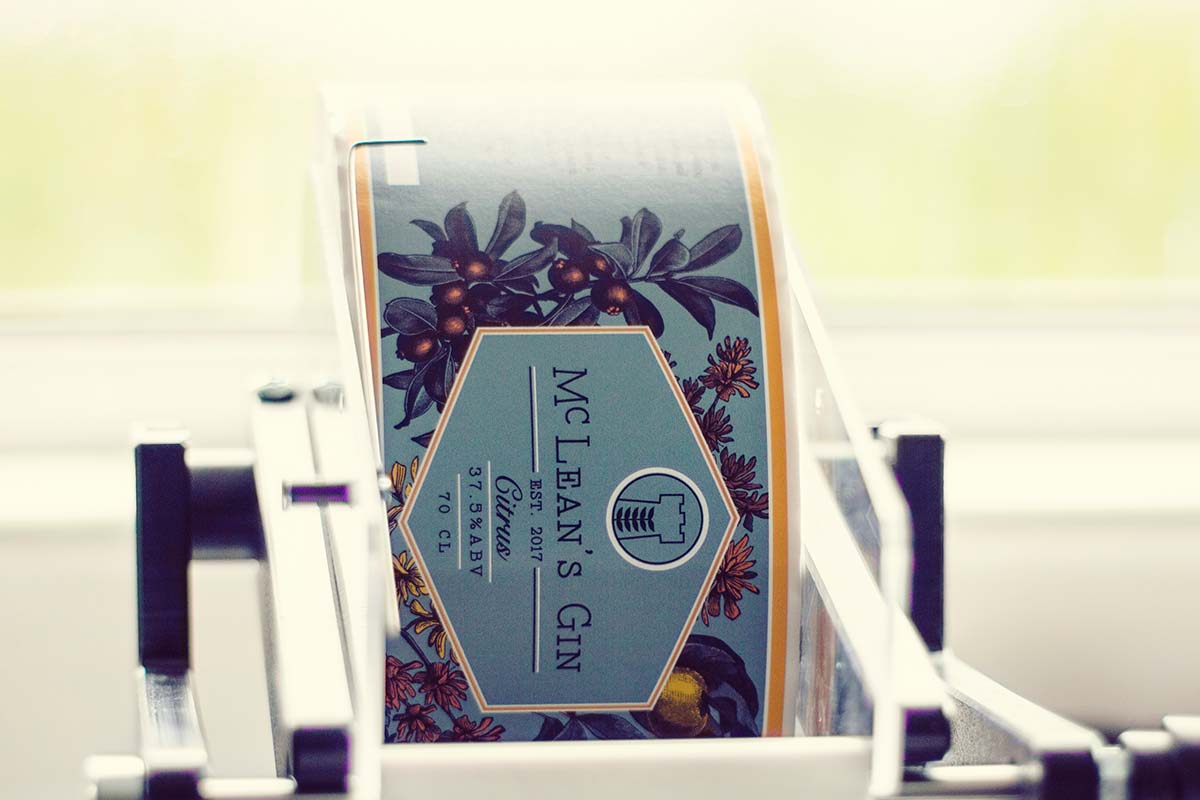 No two days are ever quite the same, but I’ll typically kick things off around 07.30. This isn’t courtesy of an alarm clock per se, but owing to the increasing volume of chit-chat in the room adjacent to Jessica and I. That’ll be our 20-month-old twin girls – Harriet & Freya – letting us know that it’s time for the day to begin. They’re great girls – currently sleeping 12 hours per night and I’m always greeted with an enthusiastic “Daddeeeeee” upon entry.

Once we’re all up, It’s a whirlwind of showering, playing, eating, organising and nappy changing – with a strong cup of coffee (or two) – taking us up to around 09.00…best get to work!

09.05 – The first couple of hours are typically spent at my laptop, and for the most part in my email inbox. The volume of emails that find their way there in a little over 12 hours never quite ceases to amaze me. On any given day, there’ll more than likely be a combination of website orders, trade orders, event enquiries, emails from suppliers, emails from potential suppliers, emails from our graphic designer, emails from our accountant, emails from our printer, website enquiries, wedding favour enquiries, invoices needing settled, Facebook messages, Instagram messages…and lots more. I’m in full “admin mode” for the first couple of hours, so the general aim is to tick things off in ascending order. Of course, just as you tick off one email, another two seem to magically arrive. No rest for the wicked, and admittedly there are a couple of emails in there from as far back as January. Hey, at least we’ve cleared 2020 now?

I’m generally happier to be sitting down when the time on the clock is followed by the letters “AM” and if my laptop is open – which it usually is – there’s something to be done. There’s usually a spreadsheet involved – I’m known to be something of a fan of them. This morning it was ordering up new packaging and materials, but on any other morning it could be researching new botanicals, doing the ground-work on some potential new products (and crunching the numbers on them), stock-taking, monitoring our key numbers for the month, updating one of many calendars, researching new potential trade customers… it never ends. Some mornings I genuinely wonder if I ought to change my title to Admin Assistant, and hopefully one morning I’ll be able to afford to hire one. 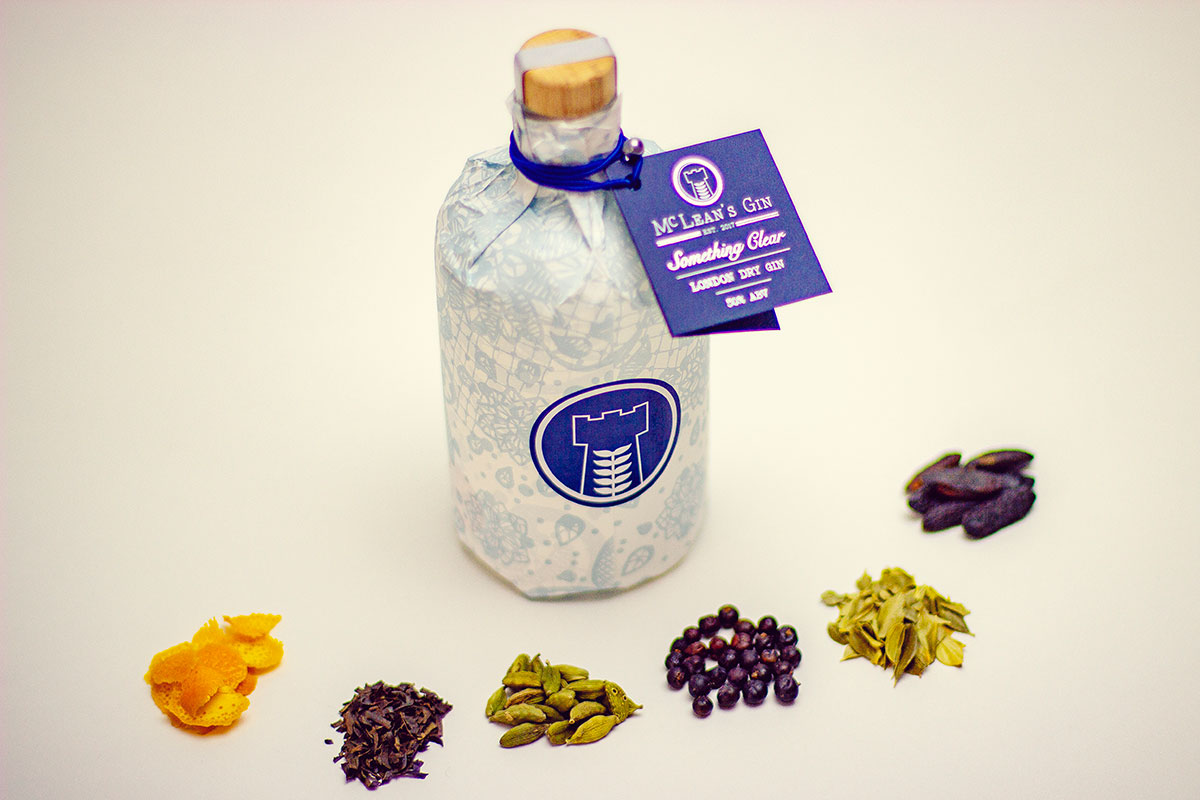 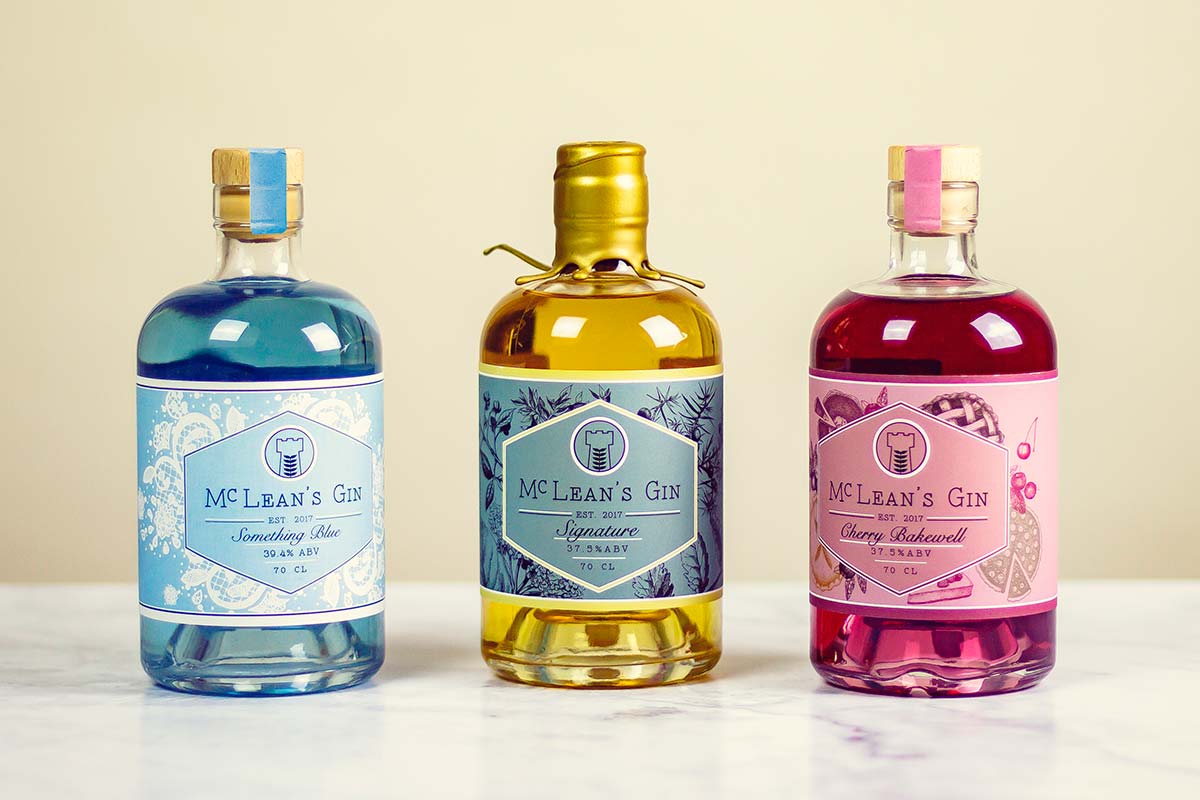 11.30 – Once I’m “out of the weeds”, it’s time to move on. Our local Post Office closes at 14.00, so I’ll get all of yesterday’s orders packaged up (with more admin building up in the process) and dropped off in good time for onward delivery. We live “out in the sticks” – around 4 miles from the charming market town of Strathaven – so the van is packed up and I’m on the road. If you’ve ordered some gin, it’s making its way to you now!

With one of the most important jobs of the day done, if there’s change in my pocket I may grab a sneaky coffee from Roasted… it’s just across the road from the Post Office, and they make a mighty fine flat white. It’s always nice to see someone ordering a slice of their Bakewell Tart too (occasionally me)… not only is it heavenly, but it features some of our very own Cherry Bakewell Gin!

12.30 – Lunchtime! Jess is a GP Trainee, currently working 3 days per week. When she’s at work, we have some childcare on hand… we owe a lot to “the grandparents” here, who have stepped up to the challenge of managing “double trouble”. A quick bite, a cuppa, some chit chat and some cuddles… 13.00 signifies nap-time for the girls (lucky for some…), and serves as a sharp reminder that it’s time to get back to work. 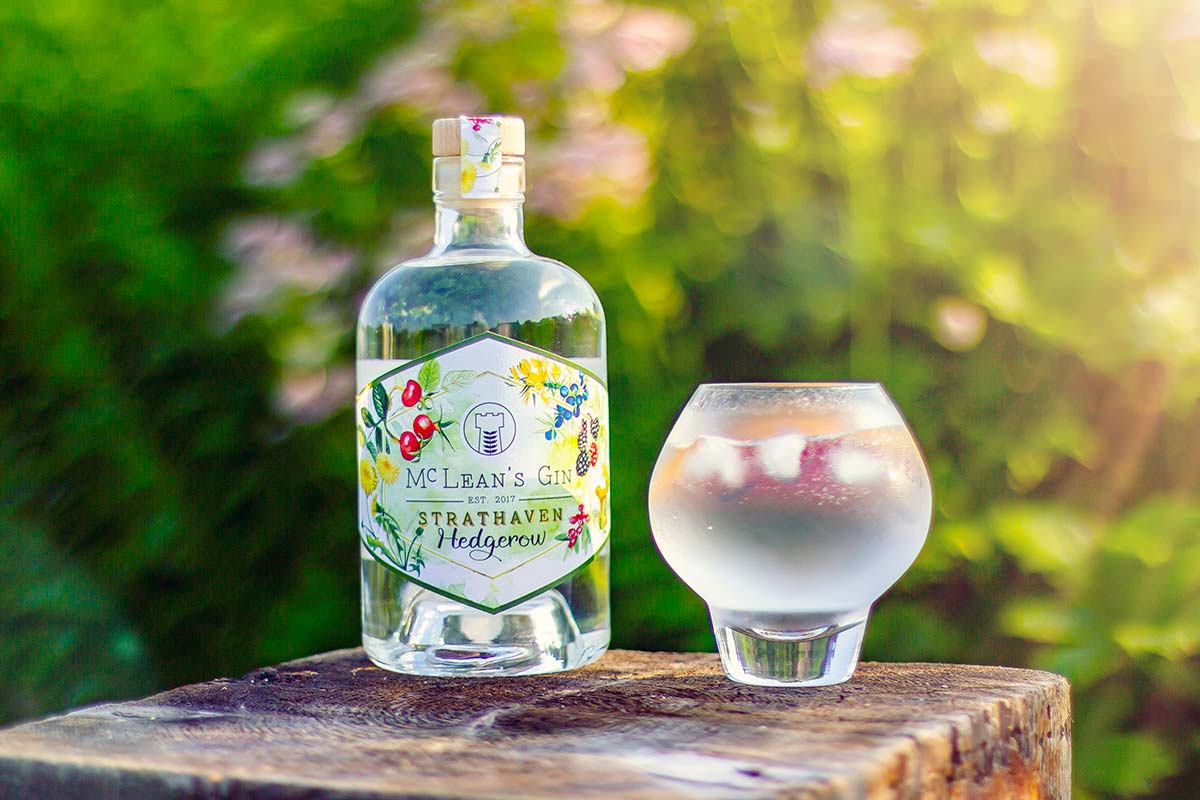 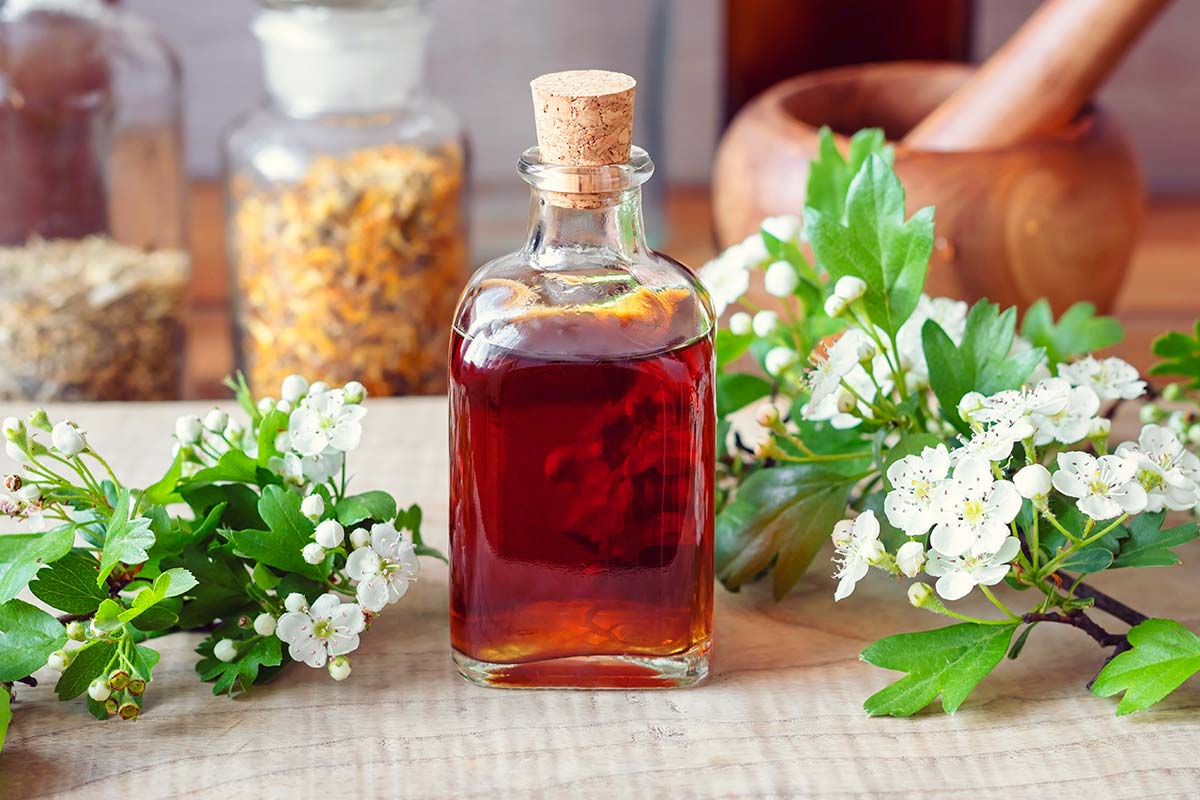 13.05 – There’s lots to be getting on with in the afternoon, and I like this side of the day to be a little more physical than the morning’s seated endeavours. If there’s gin to be bottled – and there typically is, around twice per week – then this takes priority. We produce our gin in batches of no more than 50 litres, and from the filling of the bottles to the application of the closure strips and everything in-between, every aspect of the process is carried out entirely by hand. It’s repetitive, but also immensely satisfying to see the fill-level on the bottling tank deplete and for the work surface to fill up with bottles of colourful liquids; labeled, stamped, recorded, signed, sealed, boxed and ready for onward distribution (and drinking!). It’s the type of job that becomes a real pleasure with some good music or a podcast.

Once I’ve scrubbed down the equipment, it’s usually pretty close to tea-time (and often time to get another batch on). From setup to clean-down, a full batch of McLean’s Gin is around 6 hours manual work, although the full infusion process typically takes around 48 hours.

No gin to bottle? No problem! There’s still plenty to be doing.

We’ve been working hard recently on our latest Strathaven Hedgerow Gin, which was just released a couple of weeks ago and it’s already sold out with the next batch coming in August! This is a very special gin, with every botanical (excluding only Juniper, for sustainability reasons) being sourced within 5 miles of our home, picked by Yours Truly. We already grow some of our own botanicals, but admittedly, like most producers, we buy in the majority. Brexit and COVID have made some botanicals a little more difficult to obtain, so it’s a good time to start adapting (and reducing our carbon footprint in the process).

I got into foraging throughout the first lockdown as part of my “daily exercise”. Initially, I didn’t expect it to become a longer-term hobby, but around 14 months later I’m more immersed in it than ever. Towards the end of last summer, we had fresh wild foray for lunch just about every day. We had Chanterelles-a-plenty (and we even dried a few handfuls for Strathaven Hedgerow); oysters; porcini; hedgehogs…some of these will fetch up to £100/kg in high-end department stores, but the joy of finding them for yourself really is priceless. We’d serve up my finds with some herbs from Jess’ kitchen garden, salad and vegetables from the polytunnel and fresh eggs from our hens; Clementine, Blossom & Clove (named after our Citrus, Floral and Spiced expressions). Foraging reconnects us with nature. It’s the most mindful, calming and utterly immersive experience that a human being can undertake. Where I’d have previously looked at a hedgerow and saw nothing but a tangled mass of green, I can now identify most of the plants growing there. Many are edible, and many are very tasty indeed – sweet cicely is my favourite find at this time of the year. It makes a lovely breath freshener, particularly after indulging on some other hedgerow plants; wild garlic, garlic-mustard and three-cornered leek – the flowers are sweet and fragrant and the fennel/anise flavour lingers for a long time. I definitely don’t go hungry when I’m foraging.

On any dry afternoon, you might find me on an edge of the town, picking gorse flowers whilst sporting my finest marigolds (it’s hard to feel dignified wearing marigolds outside of a kitchen setting but if you’ve ever tried picking gorse, you’ll understand the need for them). If isn’t gorse flowers it could be beech leaves, Scots Pine needles, or dandelions, and on the other side of the summer it’ll be brambles (time to dust off the marigolds again), hawthorn berries or rose hips, amongst a few others. I’ll come armed with at least two bags; one (or more) for collecting different botanicals and another for collecting rubbish; I’ll never understand why people view our countryside as a home for crisp packets or plastic bottles. 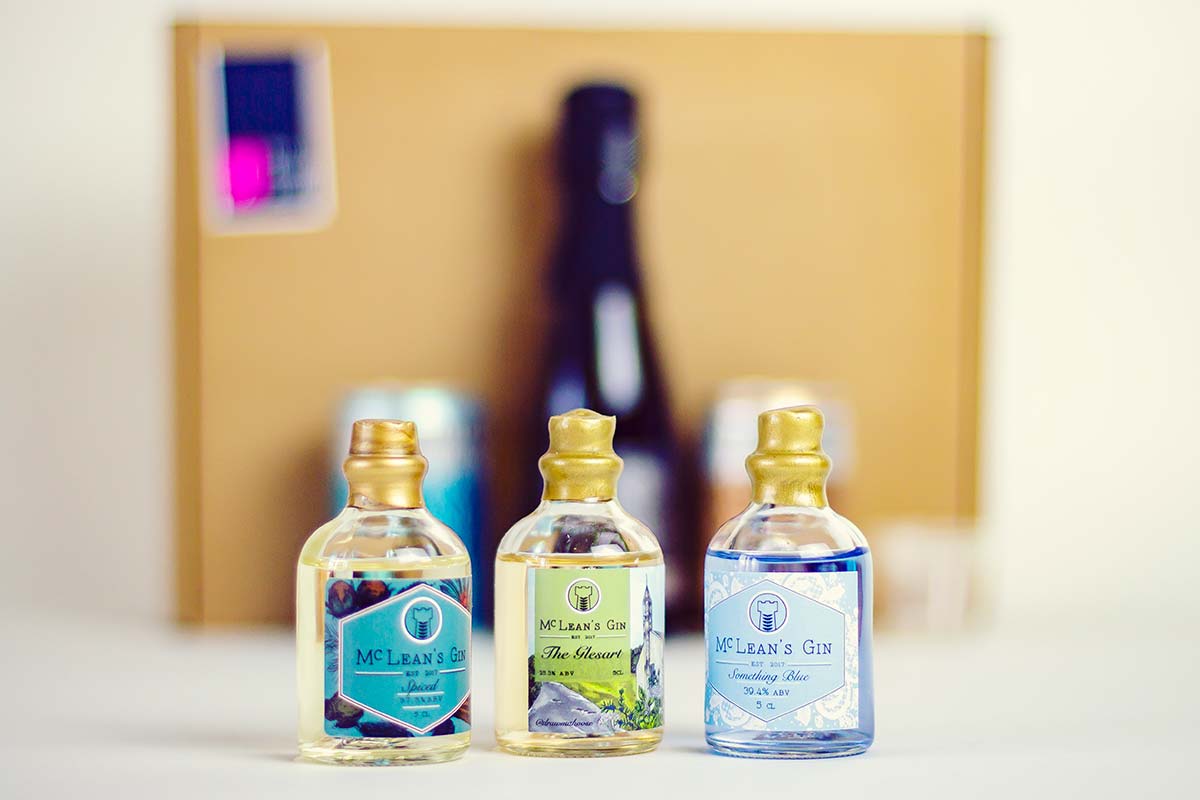 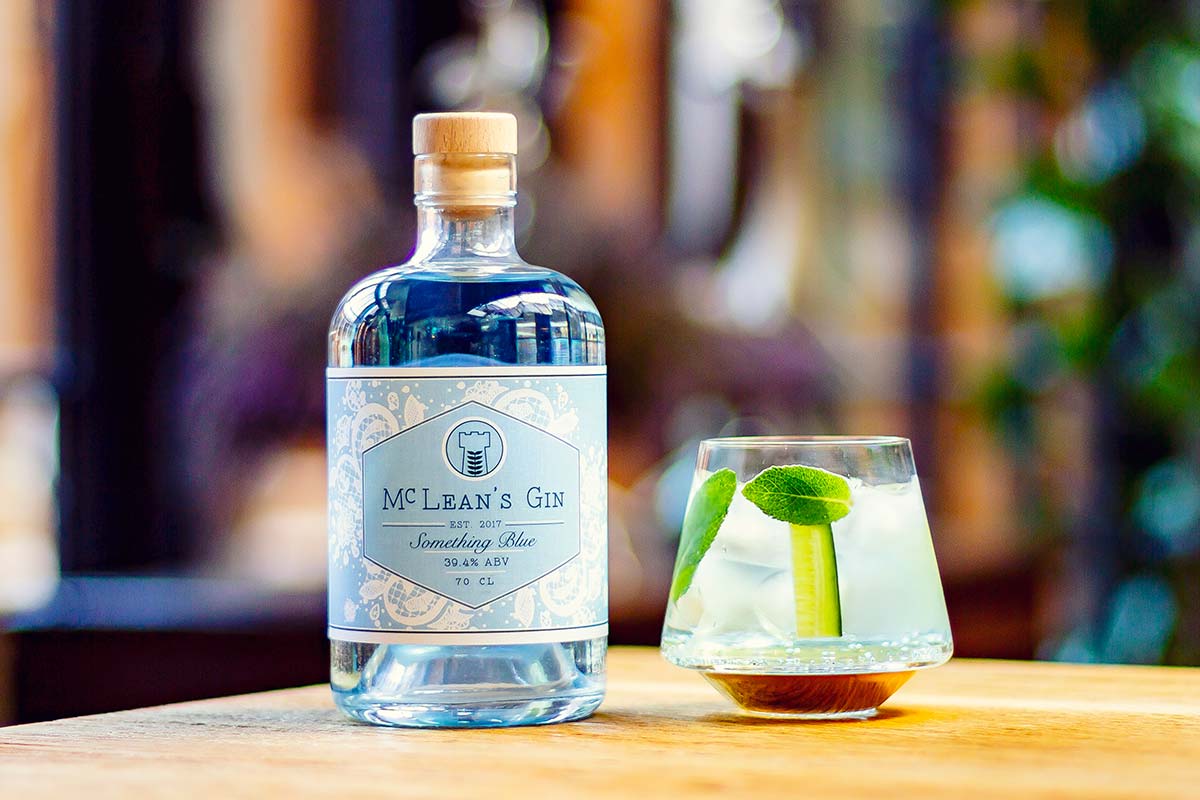 17.30 – I’m never quite sure where the afternoons go, but they certainly disappear quicker than the mornings. Time flies when you’re having fun! Jess is home around about now, and so it’s time for dinner. We’ll eat as a family and the girls will eat what we’re having – they’re very well trained. Next, it’s tidy up time, some playing (in the garden if it’s dry), cuddles, books, all rounded off with bath and bed time for the little ones.

19.30 – Well, what do you know…another 20 emails! I’ll typically work on until around 20.30 tidying up some admin and other bits and pieces. What isn’t urgent will probably wait until tomorrow morning, when it all starts over again. The day’s forage will be done dehydrating around now, so I’ll weigh everything out, seal them tightly and type a few numbers into my gin spreadsheets. Over 120 hours of foraging went into our Strathaven Hedgerow release so it’s a very special gin for us. No two Vintages will ever be quite the same… next year we’ll explore some alternative botanicals as our knowledge of the local flora & fauna continues to grow.

I hated my first Negroni and wondered why on earth people would willingly put themselves through drinking one, but once you’ve acquired the taste for it, there’s no going back. It’s punchy (at around 26% ABV), bitter-sweet and refreshing; the perfect end to the day, cuddled up on the sofa, tidying up. Our Citrus Gin is our staple for a Negroni. From here on it’s chit chat, TV, some cuddles, and…. 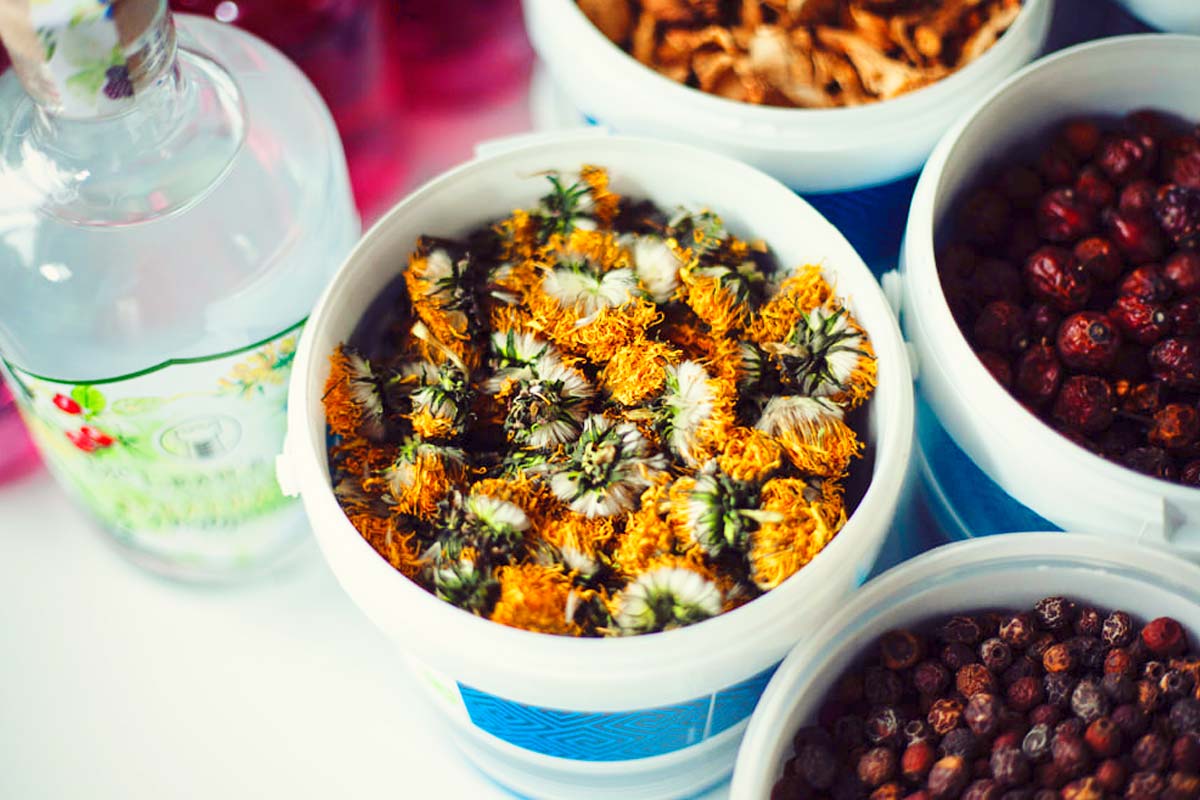 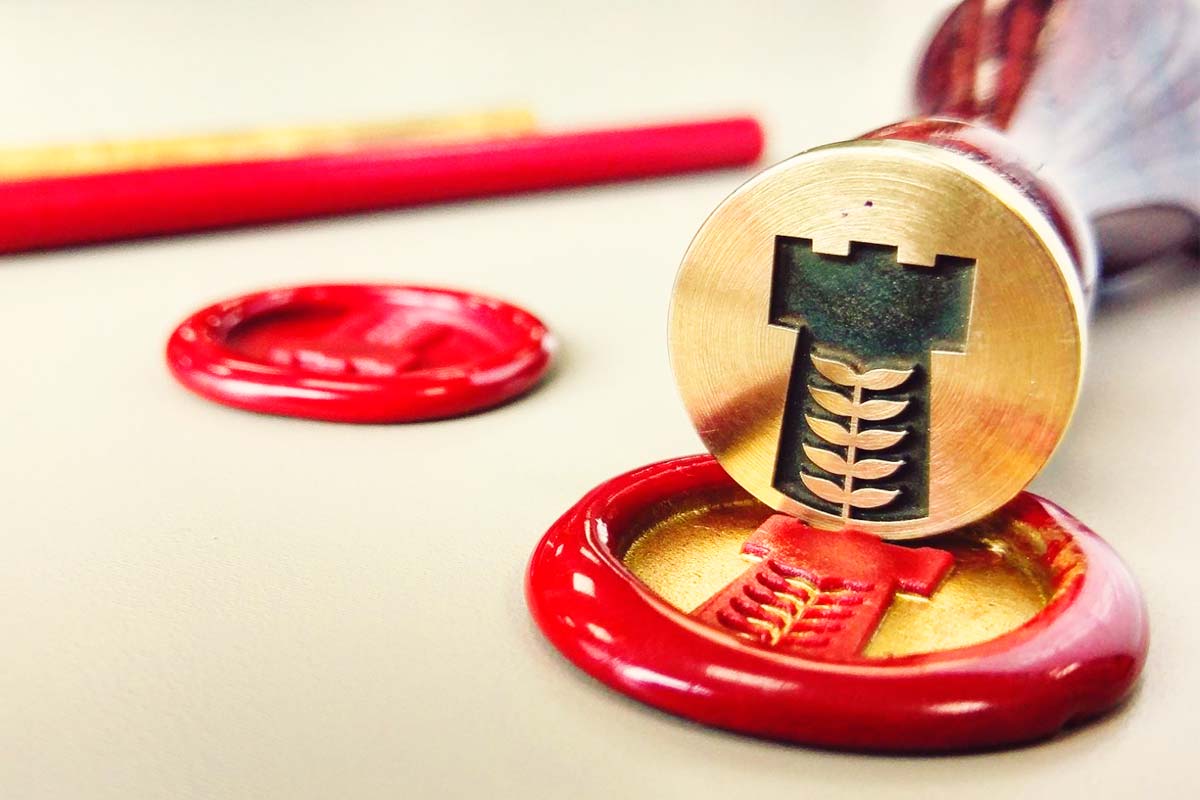 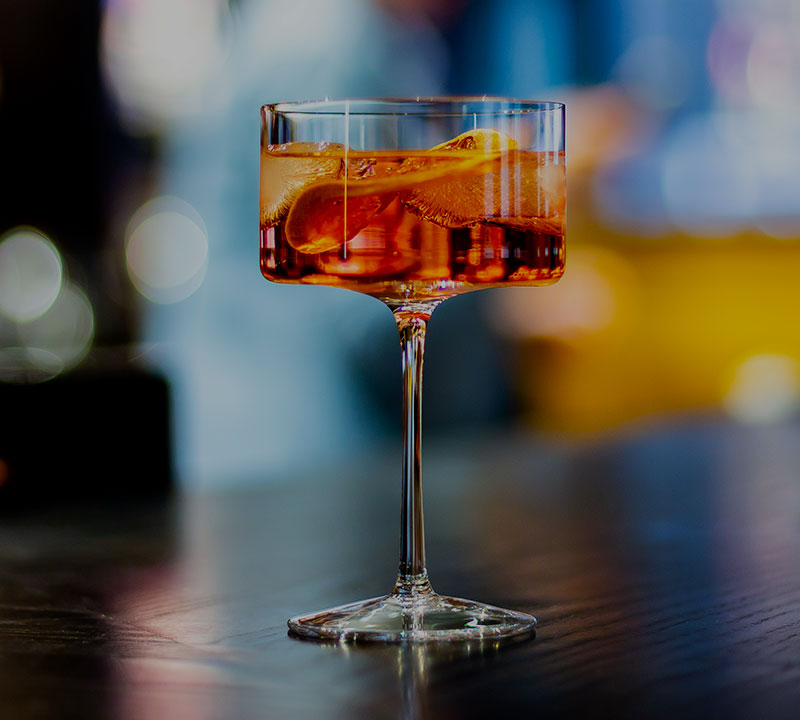