Deeside Brewery was founded in Banchory in 2012 by Michael Bain. With the experience gained and success of the brewery, the team built an extension in 2017 to house their new experimental distillery – Deeside Distillery, which is thought to be the first new whisky distillery in the Royal Deeside area for almost 200 years. Deeside Distillery contract distil for other Scottish Gin makers and they produce their own range of Still River gins.

With the aim of producing original and innovative spirits led by head distiller Liam Pennycook, the distillery produces its own base spirit for various drinks, placing it alongside only a handful of other Scottish distilleries who use this approach of creating their base spirit from scratch. In 2018, Deeside Distillery created the world’s strongest gin with a 77% ABV strength – Naked Gin ‘Uncut’. There are also plans to open a new brewery and distillery with a tap room and visitor centre. Naked Gin is the signature gin from Still River. A juniper focused gin that delivers plenty of flavour and depth including citrus notes. Rhubarb Old Tom Gin is a sweet gin that uses rhubarb as the key botanical. The Old Tom name hails from a recipe popular in 18th-century England, a gin that is slightly sweeter than London Dry, but slightly drier than the Dutch Jenever. 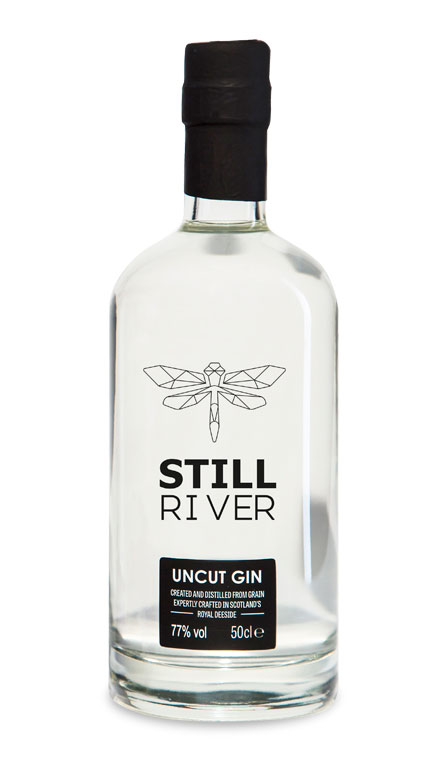 In March 2018 this was launched as the world’s strongest commercially available gin. With a strong juniper flavour and sweet spicy notes, this gin can be enjoyed either neat, over ice or with a tonic. Bottled at 77% ABV with an initial run of 101 bottles, it’s advised to enjoy this gin sensibly. A blend of juniper, spices and fruit creates a gin that works beautifully well over ice. Distilled using the juniper forward gin base of Deeside Distillery Naked Gin, this gin expression balances the warming spices of cinnamon and clove with fresh, tart plums. A juniper forward flavour profile with fresh spiced plums gives way to rich and warm spices on the finish.

The Deeside Distillery sits on the outskirts of Banchory in Royal Deeside Aberdeenshire and resides in some repurposed agricultural buildings, which also house the Deeside Brewery. The distillery make their own neutral grain spirit that forms the base of their gin expressions. Led by Head Distiller Liam Pennycook, the distillery has created some innovative products including Eau de Vie, Rum, Vodka and soon to be Whisky. They have plans to release a variety of new spirits along with building a new brewery and visitor centre for their range of award-winning beers, ales and spirits. The distillery houses a variety of still types including an Adolf Adrian bespoke still. All products are distilled, bottled and filled on site.

Tour: No
Shop: No

End of the Road - Read More